Germany’s young substitute Christoph Kramer was filling in for Sami Khedira in his 4th international cap ever against Argentina in the finals of the World Cup when he got nailed in the head and taken off in the first 31 minutes of the game by Eziquiel Garay.

Christoph Kramer. No wonder he could barely walk. Concussion not a FIFA priority it seems. #ger #arg pic.twitter.com/D5iQHRlNbU

1. He Replaced Sami Khedira in the World Cup Final

Germany’s leading defensive midfielder Sami Khedira was taken out of the lineup prior to the final match against Argentina in the 2014 World Cup due to a calf injury during warmup.

It was Kramer’s first big debut in the spotlight.

2. He Got Taken Out of the Final After 31 Minutes Due to a Concussion

Serving as a replacement for Khedira, Kramer then needed a replacement himself after getting concussed in the 31st minute by Ezequiel Garay of Argentina. This is a huge problem for Germany’s midfield.

Kramer has only played in 3 international games before the World Cup final, one of the in the round of 16 as a substitute in the 109th minute against Algeria. 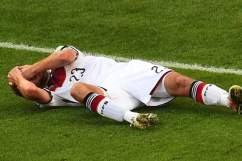 Kramer is only 23 years old and went pro when he was 19. He joined Bayer Leverkusen in 2010 and still plays for them now.

4. He Has Been on Loan Most of His Career

After joining Bayer Leverkusen‘s squad in 2010, he was loaned out right away in 2011-2013 to VfL Bochum and then again to Borussia Mönchengladbach in 2013. It is unknown when he will return fully to Bayer Leverkusen.

5. He is a Defensive Midfielder

Read More
5 Fast Facts, Soccer, Sports, World Cup
Germany's young substitute Christoph Kramer was in for Sami Khedira when he got elbowed in the head and taken off in the first 31 minutes of the final game.