The winner of the 2014 World Cup final between Germany and Argentina will receive $35 million, according to NBC Sports. The money is paid to that country’s soccer federation. 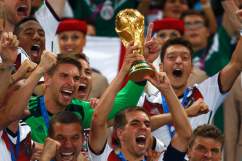 The losers will get $25 million (up $1 million from 2010). As a result of winning the third place playoff, the Dutch got $22 million with Brazil in forth place getting $20 million.

It’s up to each nation’s soccer federation to decide how the money is divided up. The German soccer federation already decreed that each player will receive $400,000 each if they bring home a fourth World Cup title.

Read More
Breaking News, Soccer, Sports, World Cup
There's the prestige of being able to say you are a World Cup winner, but then there's also the cash prize to consider.