Dwayne “The Rock” Johnson met Lauren Hashian while filming The Game Plan in 2006, and they started dating the following year.

Although the celebrity couple shies away from the limelight, here’s what we know about the woman who stole the wrestler-turned-actor’s heart.

1. She’s Only Been on the Red Carpet a Few Times

Since they started dating, they’ve only walked a handful of red carpets together.

The first was for the premiere of Johnson’s film, G.I. Joe: Retaliation in Hollywood on March 28, 2013.

The second-ever premiere they attended was for his newest movie, Hercules, on July 23, 2014, at the TCL Chinese Theatre in Hollywood. On February 22, they were at the 2015 Academy Awards together.

Although they keep their personal life private, Johnson has gushed about his lady love in interviews.

He told the Hollywood Reporter, “She embraced and loved me at my very worst and lifted me up to be my very best.”

He also said to People:

To fall in love again? That’s a hard thing to do twice in the position I’m in. I’m one lucky son of a b**ch.

Here is a video of the couple meeting a young fan, whose name happens to be Lauren, at the gas station:

2. People Think Dwayne Divorced His Wife for Her

When Johnson was a student at the University of Miami, he met and eventually married Dany Garcia.

They have a daughter, Simone, now 12, and divorced in 2007, around the time he started up with Hashian.

The split hit him hard, and he told the Hollywood Reporter that, at the time, he thought, “What kind of dad does this make me? What kind of man will I now become?”

He added, “Failing at marriage and as a husband was a heavy thing.”

Hashian was first photographed with Johnson, a Massachusetts native, while they vacationed in Hawaii in August of 2008.

In the clip above, you will see her as one of the finalists on the 2005 competition show R U That Girl hosted by TLC’s Chilli and T-Boz.

You can listen to her cover of Rihanna’s “Stay” here.
As far as her songwriting experience goes, here’s a song she cowrote for YaBoi Shad. She also sings on the track.

4. She Was With Dwayne When He Found Out That Paul Walker Died

The two were in the car together when Johnson got the news about his Fast and Furious costar.

He told the Hollywood Reporter:

I was driving with Lauren when she immediately turned very quiet and was looking at me, studying, wondering if I knew. I pulled over and looked at my messages and had a moment where I just caught my breath. We said a prayer right then to give his daughter strength — because we had talked about our daughters. That’s what we would talk about. Both of us were divorced, and we talked about the power of being a dad and the strong connection of a dad and his girl. Then once we got home, we started bawling.

Her father is “Sib” Hashian, the drummer for the ’80s band, Boston. His Wiki page profile picture is one with Lauren.

Her mother, Suzanne, used to work as a Bunny at the Dallas Playboy Club. 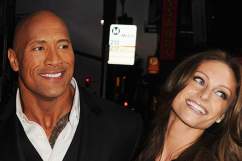 Dwanye Johnson & Lauren Hashian: The Photos You Need to See

Loading more stories
wpDiscuz
27
0
Would love your thoughts, please comment.x
()
x
| Reply
Lauren Hashian has been dating Dwayne Johnson since 2007. The couple stepped out on the Hercules red carpet on July 23.