Marco Rodriguez, a FIFA referee hailing from Mexico, has given, or rather not given, some of the most controversial calls of the 2014 World Cup. Yet, he presses on, preparing to referee the semifinal match between Brazil and Germany on Tuesday, July 8.

Here’s what you need to know about this veteran ref:

1. He Missed the Suarez Bite

In one of the most talked about events of the 2014 World Cup, Luis Suarez of Uruguay, one of the best players in the world, was suspended after biting Italian defender Giorgio Chiellini. As both players beseeched a clueless Rodriguez, he walked away from the incident without giving any cards.

After the game, Suarez was suspended for nine matches.

2. He’s Known for Handing Out Tons of Cards

Rodriguez is referred to as one of the most “card happy” referees in the World Cup, having dismissed 51 players during the 79 international games leading up to the tournament, reports Bleacher Report.

You can watch FIFA’s official profile of Rodriguez here.

4. He Serves as a Priest & Asked Not to Be Called ‘Dracula’

Because of his signature widow’s peak hairline, Rodriguez earned the nickname “Chiquidrácula,” meaning a young Dracula, because of his resemblance to the infamous blood-sucker.

The nickname is particularly offensive to Rodrigez, who is very religious. He reportedly serves as a Protestant priest outside of his career as a referee.

5. He Will Referee Brazil vs Germany

Rodriguez will take charge of the high-stakes match between Brazil and Germany on Tuesday July 8 at 4 p.m. The winner of the match will play either Argentina or Netherlands in the final match of the 2014 World Cup.

You can read how to watch the match online below: 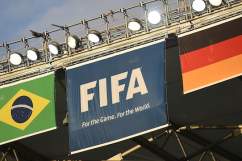