Oprah interviewed Matt Sandusky, son of the disgraced former assistant football coach at Penn State, and it airs on July 17 on Oprah Prime.

In the telling interview, he talks about being abused by his foster father, Jerry Sandusky.

Here’s what you should know about the inspirational son of a despicable villain.

1. He Was Adopted by Jerry

The New York Times reported that Jerry “took Matt on trips, gave him tickets to football games and escorted him around the Penn State athletic facilities” as part of their friendship.

After spending time with the family, he moved into the Sandusky home in 1995 as a foster child.

He was then legally adopted by Jerry and Dottie Sandusky when he turned 18.

2. He Started a Charity for Victims

Peaceful Hearts Foundation provides survivor-informed advocacy for the elimination of childhood sexual victimization and trauma. We envision a safe society in which all survivors can come forward, share their truths and receive the love and support they deserve.

3. He Recorded an Abuse Confession

During the trial of his adopted father, Matt originally denied being another victim.

He then recorded a confession saying that he was, in fact, abused at the hands of Jerry.

NBC obtained the tape, and noted it said that “his father would enter his bedroom at night and ‘blow raspberries’ on his stomach, then move his hand down his body, rubbing up against his genitals.”

However, he said on the tape that there was never any penetration or oral sex.

In the Oprah interview, he added:

Bedtime was the bad part. But any other time that … we were doing anything in the home with the family, it was fine and it was — again, you would look at that family and you would say: ‘Wow.’

4. He Applied to Legally Change His Name

In July of 2013, he filed to have his named changed, along with the names of his wife and four children.

5. He’s Married to His Second Wife

Sandusky was engaged to Kim Gemmill when the scandal broke, and the couple are now married with one child.

Kim is the co-founder of Peaceful Hearts Foundation.

Before that, he married Jill Marie Jones and had three children with her. 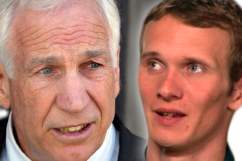