Paul McLeod, the owner/operator, of popular Elvis attraction, Graceland Too, in Holly Springs, Mississippi, is accused of shooting dead a man at his home on July 15, reports The Daily Journal. Just two days after the shooting, on July 17, McLeod was found dead on his front porch.

1. A Man Was Shot Dead Just Inside ‘Graceland Too’

2. Taylor May Have Been a ‘Trespasser’

Early reports identified Dwight Daniel Taylor as a “trespasser.” No charges are being brought against McLeod as a result of the shooting, reports the Daily Journal. Taylor is believed to have called to the museum and asked for money. When McLeod refused, Taylor wouldn’t leave which is when the shooting happened. McLeod was taken in for questioning but was released.

According to a press release from McLeod’s attorney, Phillip Knecht:

At approximately 11:00 P.M., Mr. McLeod heard loud banging at his front door. Upon opening the door, an adult male broke the glass of Mr. McLeod’s front door, forced his way through the door and demanded Mr. McLeod give him money. The perpetrator refused to leave the home. An altercation occurred inside the home, resulting in the perpetrator’s death.

WREG reports Dwight Taylor’s mother, Gloria Taylor, saying “All we want to know is why, why did he do it and nobody’s telling us anything.” Dwight’s mother says that her son was there to pick up money for work he had done in painting the museum. Holly Springs Mayor, who is also the town’s police chief, Kelvin Buck says:

There seems to have been a home invasion and the resident of that house felt that his life was in danger and took action to protect themselves as far as we know.

In addition to doing odd jobs around Holly Springs, Taylor was a blues musician.

Mr. Taylor was a local man who essentially begged food and money off anyone he could, including myself. At the time of his death Mr. Taylor had violated his probation after allegedly committing domestic assault. The police were actively looking for him.

The home is known as Holly Springs’ number one tourist attraction. Part of the charm of the home is McLeod himself, known for his eccentric style and his claim to drink 24 cans of soda per day.

Graceland Too is located just outside of the town of Holly Springs. It’s a 24-hour Elvis musesum with Paul McLeod regularly giving guided tours of the home. The Daily Journal article states that Taylor was not at the home for a tour. After the incident on July 15, Graceland Too will be closing to visitors for the time being.

5. The Venus Is Popular With College Students

Due to being open 24 hours per day, Graceland Too is a popular road trip destination for college students.

Paul McLeod allegedly shooting a man last night is horrifying when I've been to Graceland Too absolutely hammered.. 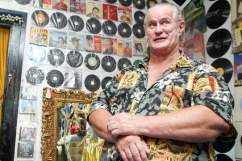 Loading more stories
wpDiscuz
1
0
Would love your thoughts, please comment.x
()
x
| Reply
Paul McLeod, the eccentric owner/operator of Graceland Too in Mississippi, is accused of shooting dead a man at his home in Holly Springs, Mississippi.