A doctor and brain scientist in Arizona was arrested after he brought an AR-15 rifle into a terminal of Sky Harbor International Airport in Phoenix Friday. Peter Steinmetz now faces two counts of disorderly conduct with a weapon, even though it’s not illegal to carry a semi-automatic weapon into an airport terminal, according to the Phoenix New Times. He’s out of jail on a $5,000 bond, according to KPHO.

1. This Isn’t the First Time He Brought a Weapon to the Airport

KPHO reports Steinmetz brought an assault rifle with him to pick up his wife from Sky Harbor International Airport in November. This happened just a few days after a gunman shot and killed a TSA agent at Los Angeles International Airport, according to KPHO. A cop told KPHO Steinmetz said he was exercising his right to bear arms.

2. He Was Arrested for the way He Was Holding the Rifle

According to the Phoenix New Times, Steinmetz’s booking sheet reads he, “then proceeded to remove the (Stag Arms) AR-15 from his right shoulder thus causing the muzzle to face two victims sitting to the right…Both victims, a mother and her 17-year-old daughter, both stated they felt in fear of their safety when the rifle was pointed in their direction.” Phoenix Police Sgt. Steve Martos told KPHO, “It certainly was concerning to other passengers at the airport, not knowing why this individual was walking around with an assault rifle slung over his arm.”

3. He Told Cops He Was Only at the Airport to Grab Coffee

According to AZCentral.com, Steinmetz told cops he was only at the airport to pick up a cup of coffee and “had no other business there.” KPHO reports Steinmetz was at the east end of the airport’s Level 3 terminal when he stopped in front of the B gates and walked over to an area where passengers were waiting.

4. He’s a Researcher at a Phoenix Hospital

We can confirm that Peter Steinmetz is employed as a researcher with St. Joseph’s Hospital and Medical Center. We are aware of the situation and are taking it very seriously. At present this issue is being handled by Human Resources and our policy is not to comment on HR matters.

According to KPHO, Steinmetz is scheduled to appear in court at 8:30 a.m. Thursday. In the meantime, he has been ordered to surrender his weapons. 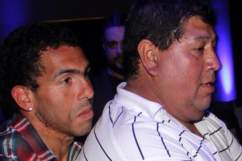 Loading more stories
wpDiscuz
1
0
Would love your thoughts, please comment.x
()
x
| Reply
A brain scientist in Arizona was arrested after he brought his AR-15 rifle into a terminal of Sky Harbor International Airport in Phoenix Friday.