Meteorologists from the National Weather Service confirmed a tornado touched down in Revere, Mass. Monday morning, CBS Boston reports. The storm, shown in the video above which contains graphic language, knocked down several trees and crushed cars in the area, according to Boston.com. Revere Mayor Dan Rizzo told CBS Boston there were, “no reports of any major injuries.”

1. The Tornado Touched Down Before a Warning Was Issued

According to Boston.com, radar showed the tornado had touched down in Revere 10 minutes before a tornado warning was issued for Essex County, in which Revere is located. Revere Mayor Dan Rizzo told Boston.com, “This clearly was an unexpected incident that took all of us by surprise.”

2. Officials Are Still Assessing the Damage Done to the Town

A release from the National Weather Service reads, “The damage assessment is still ongoing to determine additional details such as the maximum tornado intensity… along with the length and width of the damage path.” In an interview with WBZ NewsRadio 1030, Revere Deputy Fire Chief Mike Viviano said, “Never in my life have I seen anything like this, we are just getting inundated with hundreds of 911 calls.” He also said, “we have no idea what happened” in regard to cars being crushed and windows being blown out.

3. Much of the Town is Inaccessible

Matt Fitzgerald, a morning news anchor for Boston Herald Radio, reports Revere police are asking people to avoid the area until further notice. A Massachusetts State Police spokesperson told the Boston Globe, “People should just avoid the entire city of Revere at the moment.” In spite of these warnings, Boston.com reports public transportation to and from Revere is still accessible, albeit with delays and detours.

4. The Tornado Was Accompanied by Flooding

The Boston Globe reports the storm lead to flooding in Revere and nearby Somervile, Mass., seen flooded in the video above. Police had to rescue a man stranded on top of his car. An officer told the Globe, “The man was standing on top of his car, which was in four feet of water. Two officers, including myself, led him to safety.”

5. Another Tornado Touched Down in New England Sunday

A tornado touched down in Wolcott, Conn. Sunday, according to NBC Connecticut. Although the tornado was small, it had an estimated wind speed of 80 to 85 miles per hour, according to the National Weather Service. Several trees were taken down in the Connecticut tornado as well. 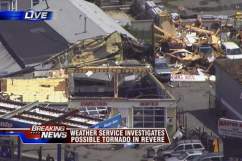 Revere, Mass. Tornado: The Photos You Need to See

Loading more stories
wpDiscuz
0
0
Would love your thoughts, please comment.x
()
x
| Reply
A tornado touched down in Revere, Mass. Monday morning, taking down trees, crushing cars and causing structural damage. Police are advising people to avoid the Boston suburb for the time being.