It’s been 64 years since Althea Gibson made her debut in the U.S. Nationals, the precursor of the U.S. Open, and 11 years since Gibson died in 2003. But as the Open begins Monday in New York on what would have been Gibson’s 87th birthday, it’s impossible not to notice the mark she’s made on tennis.

Long before Serena Williams was one of the most dominant players in tennis history and even before Arthur Ashe became the first black man to win the U.S. Open, Gibson — who broke tennis’ color barrier with her debut at Nationals — was breaking down barriers.

Google honored Gibson with a Google Doodle celebrating her life, helping to shine a light on her accomplishments as the tournament begins.

Watch the video above for a feature on Gibson, and read on for more about her inspirational life and career.

1. Gibson Broke Tennis’ Color Barrier When She Made Her Debut at the 1950 U.S. Nationals

Three years after Jackie Robinson made his debut for the Brooklyn Dodgers, tennis — both men’s and women’s — was still an all-white sport. That all changed when the U.S. Lawn Tennis Association, then the country’s top tennis governing body, bowed to pressure from activists and fellow players and let Gibson play in the tournament.

In February 2005, a panel voted her appearance at the nationals the No. 1 moment in black tennis history, topping the founding of the American Tennis Association in 1916 and Ashe’s first U.S. Open crown in 1968. 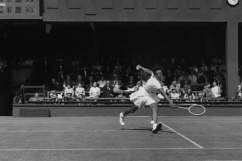 Althea Gibson Photos: The Pictures You Need to See

2. Alice Marble Pushed for Gibson to Be Admitted to the Tournament

As the two-time winner of the national black women’s tennis championship, Gibson thought she had a good case for being admitted to the 1950 U.S. Nationals. But it appeared as if she were going to be shut out again until Alice Marble, a four-time winner of the event, advanced her caused in the July 1950 issue of “American Lawn Tennis” magazine.

“If Althea Gibson represents a challenge to the present crop of players, then it’s only fair that they meet this challenge on the courts,” Marble wrote.

Althea Gibson receives a kiss from compatriot Darlene Hard, whom she beat in two sets to become the first black woman to win the Women’s Singles Finals at Wimbledon in 1957. (Getty)

In 1956, Gibson made history when she won the French Open, becoming the first black player to win a Grand Slam tournament.

But at that point, she was just getting started. Over the next two seasons, she was the most dominant player in the world, winning both Wimbledon and the U.S. Nationals in 1957 and 1958.

She retired as an amateur after the 1958 season and became a professional, which at the time meant more money but less prestige on the world stage.

In 1971, Gibson earned the ultimate honor in tennis: Induction into the International Tennis Hall of Fame.

Here’s how her Hall of Fame bio describes her:

Tall and sinewy, determined and athletic, Althea Gibson turned the 1950s into a showcase for her talent and temerity. Breaking the color barrier in 1950 at Forest Hills by gaining entry to the U.S. Championships, Gibson played with peak efficiency from 1956-58. In that span, she collected five major singles titles, sweeping Wimbledon and the U.S. Nationals back-to-back in the latter two seasons. A confident, aggressive player who exploited her penchant for finishing points emphatically with the volley, Gibson briefly played pro tennis before a campaign in professional golf.

5. She Was Friends With Sugar Ray Robinson & His Wife

Edna Mae Robinson, wife of the American boxer, Sugar Ray Robinson, using a cine camera from the back of a car in 1952. (Getty)

Gibson was born in South Carolina, but moved with her family to New York City when she was 3. According to the ESPN Sportscentury piece, Gibson dropped out of high school in New York and moved back to the south after getting some advice from boxing legend Sugar Ray Robinson and his wife, Edna.

According to the ESPN Sportscentury piece:

Soon-to-be welterweight champion Sugar Ray Robinson and his wife, who had befriended Gibson, advised her to go South. She did. Each doctor took her into his family — Eaton during the school year, Johnson in the summer. Not only did they provide tennis instruction, they also straightened her out academically. She went back to high school for her last three years and graduated in 1949 in Wilmington, N.C. 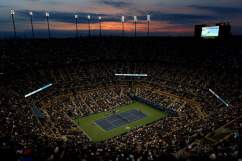 Loading more stories
wpDiscuz
3
0
Would love your thoughts, please comment.x
()
x
| Reply
Althea Gibson was a pioneer in tennis and an inspiration for many of the players competing in the U.S. Open, which begins Monday in New York.