Award winning TV producer Charles Belk is telling the world about the racially profiled arrest he suffered on August 22 in Beverley Hills. Belk says that the Beverly Hills PD arrested him as he was leaving an Emmys party because he “fit the description.”

1. Belk Says He Wasn’t Allowed to Talk to His Lawyer

On Friday afternoon, August 22nd around 5:20pm, while innocently walking by myself from a restaurant on Wilshire Blvd, to my car up LaCienega Blvd my freedom was taken from me by the Beverly Hills Police Department.

Within seconds, I was detained and told to sit on the curb of the very busy street, during rush hour traffic.

Within minutes, I was surrounded by 6 police cars, handcuffed very tightly, fully searched for weapons, and placed back on the curb.

Within an hour, I was transported to the Beverly Hills Police Headquarters, photographed, finger printed and put under a $100,000 bail and accused of armed bank robbery and accessory to robbery of a Citibank.

Within an evening, I was wrongly arrested, locked up, denied a phone call, denied explanation of charges against me, denied ever being read my rights, denied being able to speak to my lawyer for a lengthy time, and denied being told that my car had been impounded…..All because I was mis-indentified as the wrong “tall, bald head, black male,” … “fitting the description.”

I get that the Beverly Hills Police Department didn’t know at the time that I was a law abiding citizen of the community and that in my 51 years of existence, had never been handcuffed or arrested for any reason. All they saw, was someone fitting the description. Doesn’t matter if he’s a “Taye Diggs BLACK”, a “LL Cool J BLACK”, or “a Drake BLACK”

I get that the Beverly Hills Police Department didn’t know that I was an award nominated and awarding winning business professional, most recently being recognized by the Los Angeles Business Journal at their Nonprofit & Corporate Citizenship Awards. They didn’t need to because, they saw someone fitting the description.

I get that the Beverly Hills Police Department didn’t know that I was a well educated American citizen that had received a BS in Electrical Engineering from the University of Southern California, an MBA from Indiana University (including a full Consortium Fellowship to business school) and an Executive Leadership Certificate from Harvard Business School. Hey, I was “tall”, “bald”, a “male” and “black”, so I fit the description.

I get that the Beverly Hills Police Department didn’t know that I was a Consultant for the NAACP, a film and tv producer, a previous VP of Marketing for a wireless application company, VP of Integrated Promotions for a marketing agency, ran Community Affairs for the Atlanta Hawks, was the Deputy Director of Olympic Village Operations for the 1996 Atlanta Olympic Games, was a Test/Quality/Mfg Engineering Manager for IBM and was a Bond Trader on Wall street. Surely, folks that fit the description wouldn’t qualify as any of those.

I get that the Beverly Hills Police Department didn’t know that throughout my entire life I have been very active in serving the communities that I have lived in, including Chapter President and National PR Chair for NSBE, a USC Student Senator, a USC Trojan Knight, a USC Engineering Student Council Member, a USC Black Students Council Member, and a Resident Assistant; as well as a founding board member of the RTP NBMBAA, a member of Durham County Transportation Advisory Board, Durham City / County Planning Commission, Atlanta House of Love for the Homeless Board, Cobb County Transportation Advisory Board, Georgia CASA Board, United Way of Greater Atlanta VIP Selection Committee, Jomandi Theater Board, Silver Lake Film Festival Board, Downtown LA Film Festival Board, Chaka Khan Foundation Fundraising Dinner Committee, and the USC Black Alumni Association Board. Nawl, not a “black male”, especially a “tall, bald” one.

I get that the Beverly Hills Police Department didn’t know that just hours earlier, I was at one of the finest hotels in their city, handling celebrity talent at a Emmy Awards Gifting Suite, as part of business as usual, and, invited to attend a VIP Emmy pre-party that very night in their city. The guy doing that, just DON”T fit the description.

What I don’t get………WHAT I DON”T GET, is, why, during the 45 minutes that they had me on the curb, handcuffed in the sun, before they locked me up and took away my civil rights, that they could not simply review the ATM and bank’s HD video footage to clearly see that the “tall, bald headed, black male”… did not fit MY description.

Why, at 11:59pm (approximately 6 hours later), was the video footage reviewed only after my request to the Lead Detective for the Beverly Hills Police Department and an FBI Agent to do so, and, after being directly accused by another FBI Special Agent of “…going in and out of the bank several times complaining about the ATM Machine to cause a distraction…” thereby aiding in the armed robbery attempt of a bank that I never heard of, or ever been to; and within 10 minutes……10 MINUTES, my lawyer was told that I was being release because it was clear that it was not me.

The sad thing is, prior to my freedom being taken from me for an easily proven crime I did not commit, I was walking back to my car, by myself, because I needed to check my parking meter, so that I wouldn’t get a ticket and break the law. In fact, if it wasn’t for a text message that I was responding to, I would have actually been running up LaCienega Blvd when the first Beverly Hills Police Officer approached me. Running!

In response, the Beverly Hills PD released a statement:

Within minutes of the robbery call being broadcast, police detained a subject less than a block away from the robbery who closely matched the clothing and physical characteristics of the male suspect. After an eyewitness positively identified the subject in a field show-up, police arrested Charles Belk for suspicion of robbery. The Beverly Hills Police Department deeply regrets the inconvenience to Mr. Belk and has reached out to him to express those regrets and further explain the circumstances.

2. Belk Is Not Taking This Arrest Lying Down

Thank you @JoyAnnReid for allowing me to have a voice for the voiceless today on @TheReidReport #fitthedescription pic.twitter.com/oqgKXxSvh9

Since his arrest, Belk has been featured in national newspapers and was interviewed on MSNBC about his ordeal. He’s also encouraging his supporters to contact the Beverley Hills PD:

3. He’s the Senior VP of a Production Company

On his LinkedIn page, Belk says that he works as “SVP/Chief Branding Officer/Producer at I Will Make You A Star Productions.”

He is a graduate of Indiana University, USC and Harvard, the Indy Star wrote about his time at the college when he was one of the few black students at the school. After leaving IU, Belk went on to the University of Southern California and to Harvard Business School.

Belk is a native of Durham, North Carolina.

Belk has been active in the NAACP since moving to California. In 2010, he helped to produce the NAACP Interactive Timeline, an interactive website about African-American history.

In addition, according to his IMDB page, Belk has produced numerous editions of the NAACP Image Awards. 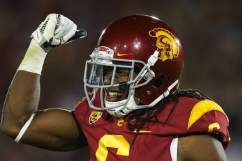 Loading more stories
wpDiscuz
0
0
Would love your thoughts, please comment.x
()
x
| Reply
Charles Belk, a black TV producer in Hollywood, ranted on Facebook about a bogus arrest he was subjected to en route to the Emmy awards.