Elizabeth Chappell was a virtual unknown to golf fans heading into this week’s PGA Championship. But with her husband Kevin tied for the lead after shooting a 6-under 65 on Thursday, that’s likely about to change.

Here’s what you need to know about Kevin Chappell’s better half:

According to her Twitter bio, Elizabeth is a Seattle-based personal trainer. She lists the website for the Seattle-based company Serious About Fitness in her bio.

2. She & Kevin Got Married Last Year & Honeymooned in Fiji

The Chappells got married last September and honeymooned in Fiji in December.

Elizabeth’s Twitter feed is loaded with commentary about her home-town Seattle Seahawks. She’s the proud owner of bragging rights in the relationship because her Seahawks beat Kevin’s 49ers in the NFC Championship Game en route to winning the Super Bowl.

4. Kevin Chappell Got His Career Back on Track As the Wedding Was Approaching

After struggling so badly in 2012 that he nearly lost his tour card, things started to click again for Chappell in the summer of 2031, just as his marriage to Elizabeth was approaching.

He told Yahoo Eurosport during the Barclays last year that things were coming together after shooting a 9-under 62 in the third round.

After nearly losing his tour card last season, Chappell, who played his college golf at UCLA, vowed to change his ways this season after a chaotic 2012.

“I went through two swing coaches, four caddies, and just never really had any structure, and that was kind of the goal for the year, to have some structure,” said Chappell, who uses Mark Blackburn as his swing coach and James Sieckmann as a putting guru.

The intense Chappell, who has a wedding date set next month with fiance Elizabeth Petrie, believes it is all coming together.

5. Everyone’s Eyes Will Be on Kevin Chappell on Friday

Chappell talks with caddie Michael Maness as he walks off the 18th green leading the PGA Championship. (Getty)

Chappell, a virtual unknown, is tied atop the leaderboard with Lee Westwood. There are plenty of people still on the course, but at worst, Chappell will be among the leaders when he tees off in the second round on Friday. 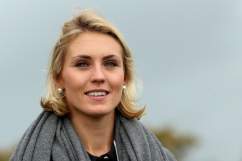 Read More
5 Fast Facts, Golf, PGA, WAGs
Follow Heavy ↓
Elizabeth Chappell is the wife of Kevin Chappell, who shot a 6-under 65 Thursday to take a share of the lead at the PGA Championship.