UFC fighter Luke Rockhold was visiting some tigers Tuesday in Thailand when he decided it’d be a good idea to grab one of them by the testicles.

The fondling was extremely brief, lasting only a second or two. But plenty of people on Instragram and Twitter thought the groping was in poor taste, and the 29-yeard-old Rockhold issued an apology while posting the video of the encounter, which you can watch here:

“For those of u who think it was disrespectful I’m sorry,” Rockhold wrote. “Was so minor just joking around. I was way too scared and would never do anything harmful to any animal.”

The picture wasn’t even the only one Rockhold posted Tuesday with a reference to someone’s testicles.

He also posted this picture putting a cub in a headlock, with the caption “This little guy tried to bite my Jewels so I had to show him who’s boss.”

Minutes later, he posted a photo high-fiving the cub the caption “We made up and high fived right after.” 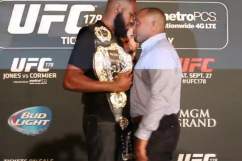 WATCH: UFC 178 Jon Jones vs. Daniel Cormier Stare Down Erupts Into A Brawl