After the current MLB Commissioner Allen H. Selig , also known as Bud, announced the plan for his retirement in January 2015, he decided to begin the transition process in appointing Robert Manfred as the Chief Operating Officer of Major League Baseball in 2013 after firing the former in 2010.

Manfred, 55, had been working with the league since 1998 under the title of Executive Vice President for Economics & League Affairs. His job required him to make decisions in regards to important economic issues. He dealt with any debt, revenue sharing, collective bargaining and matters concerning all 30 franchises in the league.

Manfred was extremely successful in his endeavors managing to successfully update renewals of the Basic Agreement in 2002, 2006 and 2011 involving issues such as the Joint Drug Prevention and Treatment Program.

When Selig appointed him as COO last year, he began to oversee the daily process of management by the Commissioner’s Office, making him a prime candidate for the MLB Commissioner position for the 2015 season.

The reorganization of our management team will facilitate an orderly transition and will position Major League Baseball’s operations for sustained prosperity well into the future. I have the utmost confidence in Rob to excel at his expanded duties and to help the industry maintain its extraordinary growth and vitality.

Rob has tremendous institutional knowledge and first-hand experience with many of our most complex matters, including labor, revenue sharing, competitive balance and the most comprehensive drug program in American professional sports. I am pleased that I will work with him even more closely in the near future.”

2. He Graduated from Harvard Law School

After law school, Mr. Manfred got a job as the clerk to U.S. District Court Judge Joseph L. Tauro in the District of Massachusetts.

3. He Was a Partner at Morgan, Lewis & Bockius

After working as a clerk in MA, Manfred was a partner in the Labor and Employment Law section of the firm Morgan, Lewis & Bockius before he started working for the MLB full-time in 1998. At the firm, he concentrated on labor and employment law which was an important translation into the job he assumed in the MLB.

The transition from the firm into the league was when he played a huge part in the 1994–95 Major League Baseball strike as an outside counselor.

He and his wife Colleen have four children together.

5. He Was Up Against Tom Werner and Tim Brosnan for the Commissioner Position

While Manfred was the favorite heading into voting, but Red Sox chairman Tom Werner impressed the owners with his presentation prior to their decision, according to the Boston Globe.

An unnamed owner told the Boston Globe of Werner’s presentation:

He knocked it out of the park. Don’t know if he changed anyone’s mind, but he made some outstanding points on where he sees the game going and what we need to do to be more current and change with the times. 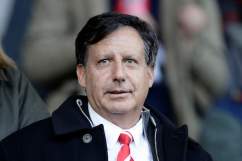