The New England Patriots are opening their preseason schedule tonight at Washington, and someone other than Tom Brady is under center.

Brady is on the sidelines as Ryan Mallett starts at quarterback, giving the former Arkansas star a chance to compete against Washington’s first-team defense.

1. He Was the Highest Drafted Patriots QB Since Drew Bledsoe

The Patriots took Mallett in the third round of the 2011 draft with the 74th overall pick. Mallett was drafted three rounds earlier than Brady was in 2000 and was the highest drafted Patriots quarterback since Drew Bledsoe was the No. 1 overall pick in 1993.

Mallett was selected with a compensatory pick that the Patriots got when they traded Randy Moss to the Minnesota Vikings.

2. He Has 1 Career Regular Season Completion in 3 Years

Mallett celebrates with Josh Boyce after connecting for a touchdown pass during a 2013 preseason game against the Giants. (Getty)

Even for a backup, Mallett has gotten stunningly little playing time over the past three years. He’s thrown only four career passes, all in 2012, and has as many interceptions (one) as completions.

It’s not as if he never plays, though. He’s played in 15 games in each of his three seasons as the Pats’ holder.

3. The Patriots Are Considering Trading Him

There’s rampant speculation that the Patriots could trade Mallett, especially after the Pats drafted Eastern Illinois QB Jimmy Garoppolo this past spring.

The conventional wisdom is that if the Pats are comfortable with Garoppolo as Brady’s primary backup, Mallett is expendable and could bring back a sizable return for a guy with such little game experience.

That means Thursday’s start could serve as an audition for teams interested in acquiring Mallett.

4. He Transferred From Michigan to Arkansas

Mallett played one year at Michigan before transferring to Arkansas, where he emerged as one of the top quarterbacks in the country.

In two seasons with the Hogs, he threw for 62 touchdowns and had an off-the-charts 158.1 quarterback rating. 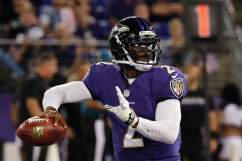 Read More
5 Fast Facts, Football, NFL
Follow Heavy ↓
With Tom Brady on the sidelines, Ryan Mallett got a rare opportunity to start Thursday night's preseason game for the Patriots against the Redskins.