After two days of being unable to drink their own water, Toledo, Ohio mayor D. Michael Collins announced Monday morning Toledo’s water was safe to drink, according to the Associated Press. Residents of Toledo, Ohio were warned by government officials not to drink their own water Saturday after the water tested positive for toxins potentially related to algae on Lake Erie, according to CBS Detroit. The “Do Not Drink” order resulted in water shortages, as shown in the video above, with the warning having applied to roughly 400,000 people, according to ABC News.

1. Water in the Area Had High Levels of Microcystin

According to WXYZ, the water advisory in Toledo and areas surrounding the city resulted from the water having high levels of microcystin, a toxin produced naturally by blue-green algae. When consumed by humans, microcystin can result in nausea, vomiting and dizziness just a few hours after consumption, WXYZ reports. The Los Angeles Times reports microcystin is rarely fatal to humans.

A combination of human and environmental factors can lead to an algae bloom and result in high levels of microcystin. Dr. Robert Sherwin of the Detroit Medical Center said in an interview with WXYZ:

When you have too many fertilizers or runoff in the water, it tends to make the algae bloom more aggressively.

Until our water is clean, this is going happen more and more. The inaction of our leaders is appalling. #toledowater pic.twitter.com/e9y8zayg4T

According to USA Today, boiling water contaminated with microcystin won’t actually help diminish levels, but will increase the concentration of the toxin in the water. Residents were told healthy adults could bathe in the contaminated water, but children should not bathe or swim in it because of the risk they could swallow the water.

The “Do Not Drink” warning led to bottled and gallon waters flying off store shelves. Sam Melden, a West Toledo resident, told the Los Angeles times, “Costco was like a war zone, and they were limiting to like five cases.” Aundrea Simmons, who was buying bottled water at a pharmacy in Toledo, told the Associated Press, “It looked like Black Friday. I have children and elderly parents. They take their medication with water.” The AP reports cities up to 50 miles away from Toledo were reporting water shortages.

4. More Than 100 People Went to the Hospital Out of Fear They Drank Contaminated Water

I just paid $30 for two cases of water. The owner of the gas station at Hill & Byrne is exploiting #toledowater pic.twitter.com/XR0rLdc2r5

The Toledo Blade reports more than 100 people went to hospitals in the Toledo area out of fear that they drank water and were feeling ill. ER doctors told the Blade some people came in as a precaution but others had symptoms of dizziness, upset stomach and vomiting.

5. This Isn’t the First Time Toxins in Water Resulted in a ‘Do Not Drink’ Warning

According to CBS Detroit, almost one year ago a city east of Toledo was warned not to drink or use its water because of an increase in the level of toxins. Toledo spent roughly $4 million last year treating its water with chemicals to try and diminish toxin levels, CBS Detroit reports. According to Time, water plants along Lake Erie have grown concerned due to the toxin threats of the last few years. 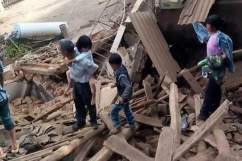 Loading more stories
wpDiscuz
0
0
Would love your thoughts, please comment.x
()
x
| Reply
Residents of Toledo, Ohio have been warned by officials not to drink their own water after tests uncovered the presence of toxins in the water. Officials believe the high levels of toxins are related to algae on Lake Erie.