Richard Lugner, the 81-year-old Austrian billionaire, has married his 24-year-old German Playboy model girlfriend, Cathy Schmitz, in Austria. The model previously told the media, “We did not intend to fall in love. It just happened. Love knows no age.”

1. Their Wedding Was Pretty Lavish

The pair were wed at the Schonbrunn Palace. The Daily Mail reports that the affair was as lavish as it comes. There were horsedrawn carriages, doves, the works.

2. Richard Lugner Is No Stranger to Beautiful Women

This is the fifth time that Lugner has been married. He’s well known for paying exorbitant amounts of money to have beautiful women on his arm. In 2014, he branded Kim Kardashian “annoying” when she accompanied him to a party. He reportedly paid her $500,000 for her presence. Other dates have included, Faye Dunaway, Carmen Electra and Paris Hilton.

3. He Once Ran for President of Austria

Richard Lugner made his money in construction. In 1979, he successfully built Austria’s first mosque, which brought him huge notoriety. His shopping mall, Lugner City, is a well known hub in Vienna. When Lugner built it in 1990, he courted celebrities to help the profile of the development. After leaving business in the late 90s, the family rackets are run by his sons, Alexander and Andreas, Lugner entered politics. He ran for president in 1998 but gave up on a career in politics in the 2000s.

4. Schmitz Has a Daughter From a Previous Relationship

Schmitz pictured just after her wedding to Lugner. (Facebook)

Schmitz has posted pictures of her and Lugner’s honeymoon on her Facebook page. She goes by the name “Crazy Cathy” on social media. On the day of her wedding, Schmitz posted this on Facebook:

In this way, also a heartfelt thanks to: my daughter Léonie, my parents, my brothers and sisters, Richard’s sons Alexander & Andreas, the family Grafestätter, all our dear friends & all people love, on this day with us with gefiebert and best wishes have come to us! I thank you trouble you all for your heart, your being and your blessing! It means really A lot to us!

5. Schmitz Was a Nurse

According to her Facebook bio, Schmitz was a presenter on Playboy TV in Germany. In November 2013, she graced the cover of German Playboy where she was named one of the most beautiful nurses in the country. She has also presented programs on German mainstream station RTL. On her personal Facebook page, she writes that she is a nurse with experience in neurology and intensive care medicine. On that page she has changed her name to Cathy Lugner. 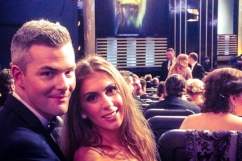