You can watch the October 8 “Blood Moon” or total lunar eclipse throughout most of North and South America, the Pacific Ocean, New Zealand, Australia, and eastern Asia.

For those in the Americas and Hawaii, the eclipse will begin before sunrise on October 8, and in the Eastern Hemisphere it will begin after sunset on October 8. The eclipse beginning around 6:25 a.m. EDT and lasting until 7:24 a.m EDT, according to NASA.

If you are unable to physically see the eclipse due to light pollution or geographical reasons, you can also watch it streaming online here and here.

ScienceCasts: A Colorful Lunar EclipseVisit http://science.nasa.gov/ for more. Mark your calendar: On Oct. 8th, the Moon will pass through the shadow of Earth for a total lunar eclipse. Sky watchers in the USA will see the Moon turn a beautiful shade of celestial red and maybe turquoise, too.2014-09-18T11:23:15.000Z

For more information on the October 8 eclipse, go here: 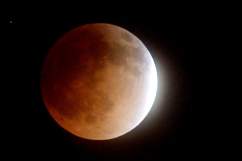 Read More
Science, Space
You'll have to get up early, but it's worth it.