Hunter Biden, the son of U.S. Vice President Joe Biden, was kicked out of the Navy after testing positive for cocaine in February 2014. The youngest Biden was in the Navy reserve since 2012.

The news was broken in a shocking report by the Wall Street Journal that details how Hunter was a public affairs officer in the Navy reserve. When he arrived at a new post in Norfolk, he was administered a drugs test, which he failed. Commander Ryan Perry told the Journal that Hunter’s discharge information was not releasable under the privacy act.

2. He Needed a Waiver to Join the Navy Because of a Past Drug Issue

He was officially discharged from the Navy in February 2014. Hunter said of being discharged:

The honor of my life to serve in the U.S. Navy, and I deeply regret and am embarrassed that my actions led to my administrative discharge. I respect the Navy’s decision. With the love and support of my family, I’m moving forward.

According to the Journal report, Biden needed a waiver to join the Navy because of drug-related issue in his youth.

The Washington Post reported in May 2014 that Hunter had been installed as the head of legal at Ukraine’s largest private gas company.

Hunter Biden is a graduate of Yale’s law school. Prior to attending Yale, he got his bachelor’s degree at Georgetown.

5. Hunter Is Married With 3 Kids

Hunter is Joe Biden’s youngest son. He was hurt in the car crash that claimed the life of his mother, Joe’s first wife, Neilia, in 1972. His wife’s name is Kathleen, with whom he has three kids, Naomi, Finnegan and Maisy. Hunter’s brother Beau served in the National Guard and spent a year deployed in Iraq. 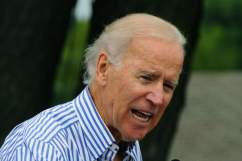