Carole Crist is the glamorous wife of Florida gubernatorial candidate Charlie Crist. She’ll be hoping for another spell as Florida’s first lady as her husband squares off against the incumbent, Rick Scott.

Here’s what you need to know about Mrs. Crist:

1. Her Family Are in the Halloween Costume Business

A stall set up by Carole’s family business, the Franco-American Novelty Company. (Facebook)

As the daughter of entrepreneur Robert Oumano, she was born into the costume and novelty gift industry. When her father died in 2000, she, along with her sister, Michelle, took over the family business, the Franco-American Novelty Company. During her time with the company, she shifted the focus towards Halloween costumes. According to a Tampa Bay Times profile, Carole came up with the slogan “Where Fashion Meets Halloween.” She left the company in 2013 but a year previously, she started her own costume business, Goddessey, in St. Petersburg, Florida.

In December 2008, Carole married Charlie Crist at St. Petersburg’s First United Methodist church. There were 200 black tie clad guests in attendance, reported that Sarasota Herald-Tribune. It was Charlie’s second marriage, in 1980 he was married for seven months to his college sweetheart, Amanda Morrow.

Carole and Charlie met in New York City in September 2007 at a Bill Clinton fundraiser.

3. Carole Has 2 Kids From a Previous Marriage Who Live With Her Ex

Carole’s former husband Todd Rome pictured with model Lauren Bush and her family in 2010 in the Hamptons. (Getty)

Between 1993 and 2006, she was married to Todd Rome, CEO of the private jet company Blue Star Jets, a business that’s been caught up in controversy in the past. Before staring Blue Star, Rome had been involved in a financial services company that was shut down due to fraudulent activity, reports Tampabay.com.

The marriage ended when Carole decided to take the couple’s daughters, Jessica and Skylar, to live in Florida. According to their divorce filings, she did so against Rome’s will. The Tampabay.com piece reports that in 2008, shortly after Carole’s marriage to Charlie, her daughter’s returned to New York to live with their father full-time. Apparently it was due to Charlie’s difficult relationship with the girls. In 2011, after a fight, the same Tampa Bay article says that Carole went three years without speaking to her children. Since this past Mother’s Day, they are repairing their relationship.

The Tampa Bay Times reported in 2008 that Carole graduated from Georgetown University in the early 1990s. Her major was in accounting. After leaving school, she moved to Manhattan where she worked as an auditor for an accountant, from there she went to work for a law-firm. When her father became ill in the late 1990s, she agreed to join the family racket.

5. She Counts Tommy Hilfiger, John McEnroe & the Hilton Family Among Her Pals

During her time married to Tony Rome, Carole lived all-around New York City, and in the Hamptons. The Tampa Bay Times reports:

She frequented Nobu, a New York restaurant co-owned by Robert De Niro, and Pink Elephant, a bar that offers Krug Clos du Mesnil champagne for $2,100. She had her long, wavy hair styled on Madison Avenue.

No sooner was a new home built, bought or rented, but that defendant became dissatisfied with it. In the first 11 years of our marriage, we lived for an average period of one to two years in a succession of no less than five apartments and three houses. … We also have had a total of four vacation houses in the Hamptons. 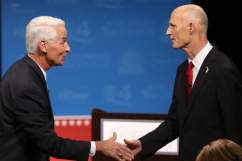 Loading more stories
wpDiscuz
0
0
Would love your thoughts, please comment.x
()
x
| Reply
She's the glamorous wife of former Florida Gov. Charlie Crist. Not only that but she also helped to revolutionize the the Halloween costume industry.