President Obama announced in a speech Thursday afternoon that he was taking executive actions to fix what the White House called America’s “broken immigration system,” halting the deportations of certain undocumented immigrants and calling on Congress to pass a comprehensive immigration reform bill.

The address comes two weeks after Republicans routed Democrats in the midterm elections, winning more than enough seats to take control of the Senate when the next Congress is sworn in in January.

Republicans have cried foul at the expected executive action Obama plans to take, accusing him of overstepping his Constitutional powers by bypassing Congress.

Obama, for his part, has acknowledged the executive action will be a stop-gap measure, but claimed it’s necessary because of Congress’ inability to pass a comprehensive reform bill.

He said Thursday he had a message for legislators who questioned his authority to act unilaterally or questioned the wisdom of doing so: “Pass a bill.” 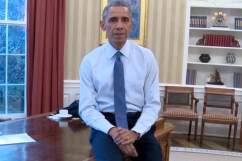