A man from Texas has been arrested in Israel on terrorism charges. Adam Everett Livvix was taken into custody on November 19 and is charged with plotting to bomb Islamic holy sites in the country. Livvix is an Indiana native.

Livvix, 30, is also wanted in the U.S. on drug charges. The Jerusalem Post reports that Livvix fled the U.S. for Israel because of these charges. According to the website Fugitive Recovery, Livvix is wanted in Indiana on marijuana possession and failure to appear charges. The website notes that he was living in Robinson, Illinois, at the time of his arrest. In 2008, it was reported that Livvix, along with his brother Charles, was arrested for stealing aluminum siding and “other construction metal” in Mattoon, Illinois.

2. Livvix Was in Israel Illegally & Posed as a Navy SEAL

US Navy says they have no record of Adam Everett Livvix, alleged Muslim holy site plotter, having been a Seal as reported by some outlets

3. He Allegedly Bought Explosives With His IDF Roommate

The Jerusalem Post reports that Livvix, along with his roommate who is in the Israeli Defense Forces, conspired to acquire guns and explosives. His roommate is also a U.S. citizen. The Jewish Press reports that “acting on intelligence” cops searched Livvix’s apartment and found explosives and guns. Livvix apparently tried to escape arrest by jumping off the balcony of his seventh floor home. He was quickly arrested and while in custody, he allegedly revealed his plans to attack Islamic sites.

4. Livvix Says a Palestinian Asked Him to Assassinate President Obama

During his time living in the Palestinian-controlled areas of Bethlehem and Hebron, Livvix claims a Palestinian man tried to gauge his interest in assassinating President Obama. The Jewish Post reports that he turned down the offer and remained focused on his holy sites targets. The Press reports that the Livvix says he was offered a sharpshooter rifle to carry out the attack during Obama’s 2013 visit to Israel.

A picture taken from the southern Israeli Gaza border shows smoke billowing from a spot targeted by an Israeli air strike inside the Gaza strip. (Getty)

The Jerusalem Post reports that Livvix has been indicted by a court in Israel. The investigation into his activities was aided by the FBI. He will undergo a psychiatric evaluation while in custody. 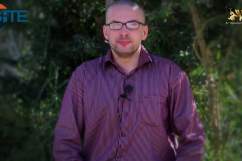 Loading more stories
wpDiscuz
3
0
Would love your thoughts, please comment.x
()
x
| Reply
Adam Livvix has been arrested in Israel, charged with plotting to bomb Islamic holy sites in the country. He's a native of Illinois who is considered a fugitive by U.S. Marshals.