The FBI is probing the August hanging death of a 17-year-old black boy whose death was quickly ruled a suicide by local police. Lennon Lacy was found hanged to death from a swing set in a predominantly white trailer park, and his family suspects his death may be a modern-day lynching.

Here’s what you should know about Lennon Lacy and the renewed investigation into the circumstances of his tragic death.

1. His Family Says He Was Found Wearing Someone Else’s Shoes

In a picture from Lacy’s Facebook page he is seen wearing a gray pair of sneakers with neon green soles. (Facebook)

His family say that Lacy left his house the night before his death in a pair of gray newly purchased Air Jordans.

The next morning he was found hanging from a swing set in an open field in a predominantly white trailer park.

In pictures taken by law enforcement at the scene, he was found wearing white, unlaced, size 10-1/2 shoes that his family did not recognize. When his body arrived at the morgue he was no longer wearing those shoes, though no other clothing was removed.

According to a report in the Guardian, the gray Air Jordans with neon-green soles have yet to be found.

His family also did not recognize the belt from which he was found hanging.

Jon David, the Bladen County District Attorney, said in a statement released on October 1st that his office had “not received any evidence of criminal wrongdoing surrounding the death.”

2. The FBI’s Announcement Came One Day Before an NAACP March to Demand a Federal Investigation

The North Carolina chapter of the NAACP has been heavily involved in pushing for further investigation into the case.

They had been working with the family to rally support for an FBI investigation, with a march planned for Saturday, December 13.


After the announcement of FBI involvement, the march seems set to continue, with hundreds of people ‘attending’ on an NAACP Facebook event page.

3. Those Seeking Answers Have Serious Concerns About the Medical Examiner’s Conclusion of Suicide

Family and friends of Lacy, as well as NAACP attorneys who have been working on the case, say they have doubts about the conclusion of suicide.

Lacy did not leave a suicide note. His mother claims that during the four days between the discovery of the body and the conclusion of suicide, the local police did not come to the house, search Lennon’s room, look at his phone, or inquire about the clothes he was wearing or the sneakers found on his body.

The autopsy report from the Office of the Medical Examiner is shown below:

His family disputes that he was depressed because of his great-uncle’s death. His mother says that while he was upset at the funeral, he grieved “as a normal person would.”

On August 28, according to his family, Lacy, who loved football and hoped to play professionally one day, was looking forward to playing in a football game the next day, and laid out his uniform before he left the house.

A pathologist, Dr. Christena Roberts, was employed by the local NAACP chapter to review the medical examiner’s report. She laid out her concerns with the decision in the report below:

Additionally, the mortician who embalmed Lacy’s body said that the markings he saw reminded him of “corpses he had embalmed where the deceased had been killed in a bar-room fight”, though the police say that some of these marks can be explained by insect activity post-mortem.

4. He Had Reportedly Been in a Relationship With a 31-Year-Old White Woman

Lacy’s mother, Claudia Lacy, gave a first-person account of her concerns over her son’s death to the Guardian, in which she mentions that her son was in a relationship with an older white woman.

She said, “There were things locally that also made me anxious. Lennon was in a relationship with a white woman over the road.” She had concerns over the age difference. “I didn’t like that,” Lacy said, “and I told her that.”

The Guardian reported that the woman’s name was Michelle Brimhall, and that she lived directly across from the Lacy family home. At 31, she was nearly twice his age.

She left her husband and the father of her children in February, relocating from Illinois to Bladenboro.

Lacy’s family reportedly claim that the couple had broken up shortly before his death, and that Brimhall had a new boyfriend. Brimhall says they never broke up but told people they were not together so that “they would stop giving us trouble.”

She is quoted by the Guardian as saying, “I had never had a man treated me as good as he did, and I probably will never find another (…) Lennon did not kill himself. He loved his mother so much, he would never put her through that.”

A report from Dr. Roberts, the pathologist hired by the NAACP, says,

“Lennon had an argument with his girlfriend. After that time he went to a mobile home located in the park where he was found. Family has expressed concern about one male that resided at the mobile home. He had a history of violence so severe that he could not live with either of his parents and was staying with the people who resided there.”

When Heavy contacted Dr. Roberts to clarify the unknown source of these concerns, she had no comment and directed further inquiries to the Lacys’ pastor, Reverend Barber.

Facebook profiles under Michelle Brimhall’s name and that of her middle school-aged daughter have many posts about Lacy’s death, calling for further investigation into the circumstances surrounding the investigation.

A profile under the name of Mike Brimhall posted several times in February about a Michelle Brimhall leaving him and going to North Carolina with their children. He posts regularly on what appears to be their daughter’s Facebook page about missing her, and posted on October 24th

“This is for the person who said I was some where and there was no possible way I was there.trying to get me tangled up in some sh*t I know nothing about,just because they hate me that much and want to my life destroyed.why don’t you just shut ur mouth and leave me out of your sh**ty life.”

His address is now listed on a Google+ page under the same name as being in Bladenboro. He is listed as previously having an address in Illinois.

5. There’s A Long History of KKK Activity in the Area 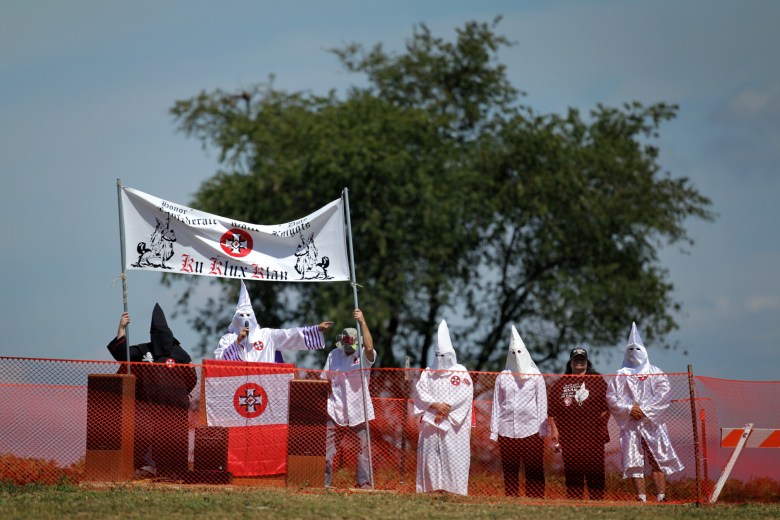 A member of the Confederate White Knights speaks during a rally at the Antietam National Battlefield September 7, 2013 near Sharpsburg, Maryland. (Getty)

A UNC project detailed the history of heavy Ku Klux Klan activity in the area surrounding Bladenboro and Bladen County in the 1950s, including allegations of law enforcement connections.

There was what was described as a KKK “uprising” between 1950-1953 in the area, which eventually led to the arrests of dozens of local KKK members by the FBI.

In 1994, students at the local high school claimed that a teacher was handing out KKK literature to certain students over 18. The same year, a permit was granted to a KKK chapter to march through Bladenboro in response to the firing of a local worker for displaying the Confederate flag.

As recently as 2003, an investigation into the murders of men associated with the Klan revealed the activities of at least two active ‘klaverns’ in the area.

After Lacy’s death, his family learned that Dewey Sykes and Carla Hudson, a white couple living directly behind the Lacy home, had a number of Confederate flags and signs saying “N****rs keep out” on their front lawn until police told them to remove them. Speaking to the Guardian, Dewey Sykes said that he regretted putting up the signs, and there is no sign they had anything to do with Lacy’s death.

A unidentified commenter on a Facebook group supporting Lacy’s family claimed that the KKK was “alive and well” in the town, and that “some are on the force”.

Days after Lacy’s burial, his grave was reportedly desecrated. The flowers his family placed there were found 40 feet from the grave and a hole appeared in the corner of the burial plot.

Loading more stories
wpDiscuz
35
0
Would love your thoughts, please comment.x
()
x
| Reply
The hanging death of black North Carolina teen Lennon Lacy was quickly ruled a suicide. But the FBI is now probing the family's suspicion that he may have been lynched.