Sandra McElroy has been identified as “Witness 40” in Darren Wilson’s grand jury hearing. Witness 40 had been held up as a key corroborator of the officer’s account of the fatal shooting of unarmed black teenager Michael Brown on August 9 in Ferguson, Missouri. In November, a grand jury opted not to recommend charges against Wilson, an incendiary decision that sparked renewed protests in Ferguson and nationwide.

Now it is revealed that Witness 40 — McElroy — has a history of making racist comments and lying to police, and suffers from bipolar disorder.

1. McElroy Was in Ferguson to ‘Study Black People’ so She Would Stop Calling Them N***ers

In extensive reporting by the Smoking Gun, Sandra McElroy is revealed as “Witness 40.” Her account during the grand jury hearing was championed by supporters of Darren Wilson (such as Sean Hannity, seen above) as an eye-witness account of the shooting because it was almost identical to Darren Wilson’s recounting. She lives some 30 miles from Ferguson, and how she came to be in Ferguson on the day of the shootings was in question.

McElroy told the grand jury that she was planning to “pop in” on a black friend whom she hadn’t seen since 1988. After being able to locate her friend, McElroy says she stopped to smoke a cigarette on August 9, just as the altercation between Darren Wilson and Michael Brown began. McElroy later admitted that she hadn’t been there to visit a friend but rather that she regards herself as an “amateur anthropologist” and that she was in the area to study black people. In a journal entry that she presented to the grand jury, she wrote, “Well Im gonna take my random drive to Florisant. Need to understand the Black race better so I stop calling Blacks N***ers and Start calling them People.” You can read her journal entry from the day of the Michael Brown shooting here:

2. In 2007, McElroy Lied to Cops About Her Relationship to a Kidnapper

In 2007, McElroy fabricated a friendship she had with Michael Devlin. He’s the man who kidnapped 11-year-old Shawn Hornbeck in October 2002 in St. Louis. She went as far as to tell KMOV that she had gone to police to tell them that she had seen Devlin with Hornbeck. McElroy said cops investigated her claims. Though the cops in Kirkwood, where Hornbeck went missing, said, “We have no record of any contact with Mrs. McElroy in regards to Shawn Hornbeck. We have found this story is a complete fabrication.”

The Smoking Gun reports that McElroy suffers from bipolar disorder, having been diagnosed when she was 16. The website adds that she hasn’t taken medication for the illness for 25 years. She also told the grand jury that in 2001 she was in a serious car accident, which affected her memory.

4. She Has a History of Making Racist Statements Online

McElroy has a long history of posting racist comments on YouTube. In one comment thread, on a video about a white woman who had gone missing, McElroy made reference to her black husband, saying, “See what happens when you bed down with a monkey have ape babies and party with them.” In another video showing two black women passing out after being sentenced for murder, she wrote, “Put them monkeys in a cage.”

She’s also a subscriber to the “We Are Darren Wilson” YouTube channel.

5. McElroy Set Up a Go Fund Me for ‘Ferguson Children’

On her now-deleted Facebook page, McElroy posted a link about a Go Fund Me page she had set up to “support Ferguson children.” The Smoking Gun story about McElroy says that she pleaded guilty to two counts of check fraud in 2007 and in 2004 she filed for bankruptcy. She was born in Tennessee, her mother was her father’s mistress. She was married until 2009 to a husband who was a park ranger, the has three daughters with him. McElroy had two sons from a previous relationship. 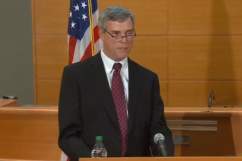 Loading more stories
wpDiscuz
26
0
Would love your thoughts, please comment.x
()
x
| Reply
It turns out Witness 40 in Darren Wilson's Grand Jury hearing was Sandra McElroy, a woman with a history of making racist remarks and lying to police.