Wassily Kandinsky is celebrated in the December 16 Google Doodle. Kandinsky was a Russian-born abstract artist who would have turned 148 today.

1. He Was the World’s Fist Abstract Artist

Kandinsky did not become an abstract painter lightly. He reached abstraction in a strenuous, thoughtful way that gives his art huge authority.

Jones adds that during his career Kandinsky reached the “logical conclusion” that “What if painting were pure color? What if it created its own imaginary world, like the world of a symphony?”

He suffered from the harmless condition, Synesthesia. The condition makes a person particularly sensitive to sounds and bright colors. The condition is common among artists, English painter David Hockney is a sufferer as was Duke Ellington and Billy Joel.

This was oddly fitting for Kandinsky who often linked his art to music. The condition, which only affects one in 2,000 people, mostly men, is the result of an accidental cross-wiring in the brain. There are skeptics of the condition who regard it as a result of hypochondria. Kandinsky had said that he discovered he had the condition when he attended a Wagner opera in Russia, he said, “I saw all my colours in spirit, before my eyes. Wild, almost crazy lines were sketched in front of me.” He also had some advice for those who are unsure if they have Synaesthesia:

Lend your ears to music, open your eyes to painting, and… stop thinking! Just ask yourself whether the work has enabled you to ‘walk about’ into a hitherto unknown world. If the answer is yes, what more do you want?

3. He Was an Anti-Communist

Kandinsky, pictured in 1913, shortly before his return to Russia. (Wikipedia)

Kandinsky was born in Moscow in 1866. He left his homeland in 1911 where he spent much of his time rambling around Europe, living mainly in Germany in the small town of Murnau. Kandinsky returned to Russia in 1914 but left in 1921 when he found himself at odds with the oppressive Communist regime. According to Russia Today, the state regarded Kandinsky’s work as “deformed spiritualism.” Even after Kandinsky’s death, his work was banned from Russian museums.

Conor Jordan, Department Chairman of Impressionist and Modern Art at Christie’s, speaks about Wassily Kandinsky’s ‘Strandszene’, painted in 1909, on display May 2, 2014 (Getty)

In November 2012, the Wall Street Journal reported that Kandinsky’s “Study for Improvisation 8” was sold for $23 million at Christie’s auction house. The painting shows a man with a broadsword in a village underscored by a rainbow. The painting had been on loan at a Swiss museum from the Volkart Foundation, the charitable arm of the Volkart Brothers commodities brokers. Prior to that deal, Kandinsky’s most expensive work was “Fugue” which he painted in 1914. Back in 1990, that sold to $20.9 million at Sotheby’s.

After the rise of Hitler in Germany in the 1930s, Kandinsky moved to France in 1933. He took up citizenship in 1939 and lived in the country until his death in 1944. Kandinsky was survived by his wife, Nina Andreievskaya, whom he had married in 1916. She had been his third wife. In 1893, he married his first wife in Russia, Anna Chimyakina. He left her for a younger artist, Gabriela Munter, whom he met in 1902. He had been her teacher at the Phlanx School in Germany. The couple split in 1914 with Munter opting to live in Munich, it was around then that Kandinsky met the woman who would be with him until his death, Nina Andreievskaya. 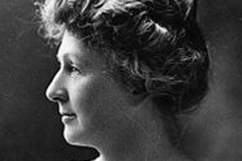