Antonio Zambrano-Montes, 35, is the Pasco, Washington man shot by police officers while fleeing with his back turned and hands up. His death was caught on video.

1. It Was Caught on Video

The above video was shared on YouTube by Dario Infante Zuniga on February 11, 2015. It quickly went viral.

Zuniga was in traffic nearby when he witnessed the altercation between Zambrano-Montes and police that ended with his Zambrano-Montes’ shooting death.

According to The Milenio, police originally tried to subdue Zambrano-Montes with a stun gun but this didn’t work. This is not seen in the above video.

In the video, Zambrano-Montes can be seen running across a busy intersection from three pursuing police officers. The officers have guns drawn. When Zambrano-Montes reaches the other side, he turns around and puts his hands up. The police then open fire on him.

2. He Was Throwing Rocks at Cars & Police

Zambrano-Montes was born in the Mexican state of Michoacán and was currently an orchard worker in Washington state.

According to The Guardian, Zambrano-Montes was “found throwing rocks – one described as ‘softball sized’ – at vehicles on a busy intersection in the city.”

Police were called to the scene because of this.

When police arrived, Zambrano-Montes allegedly refused to put the stones down and even threw two at the officers, reports U-T San Diego.

3. A Coroner’s Inquest has Been Requested

The rocking throwing resulted in his death by police. Now a coroner is calling for a coroner’s inquest into his death.

A coroner is considering taking the rare step of calling for a coroner’s inquest into the police shooting death of a man who authorities said had thrown rocks at officers in Pasco, Washington, Tuesday.

“I want to bring the facts of the case to the public and let a jury of six made up of the community make the determination whether the shooting was justifiable or not,” Franklin County Coroner Dan Blasdel told NBC News Thursday.

But what exactly is a coroner’s inquest? According to Adams County Coroner:


A Coroner’s Inquest is an inquiry into the manner and cause of an individual’s death, conducted by the Coroner or Deputy Coroner with a court reporter and six jurors present. The jurors are citizens of the county in which the death took place.

The purpose of an inquest is to present information concerning the victim’s death in order for the jury to determine the cause and manner of a death. The cause of death is often readily apparent and obvious, based on the facts, circumstances, medical evidence and in some cases, toxicology and autopsy results. The real essence of the jurors’ responsibility is to establish the manner of death (Suicide, Homicide, Accident, Natural or Undetermined).

Currently the incident is being investigated by a special investigation unit aided by the FBI.

4. He Had a Criminal Record

In January 2014, Zambrano-Montes was charged with assaulting a police officer.

But whether officers at the scene knew this at the time is unknown.

However, this is fourth fatal shooting in the Pasco, Washington area in six months.

Antonio Zambrano-Montes’ death Tuesday marks the fourth fatal police shooting since last summer in Pasco, a city about 215 miles southeast of Seattle. In three previous cases, prosecutors cleared officers with the Pasco Police Department and a sheriff’s deputy who was working on a regional SWAT team.

The incident itself has already been addressed by the ACLU of Washington. NBC reports:

“This is a very disturbing incident, and our hearts go out to the family of Antonio Zambrano-Montes. Fleeing from police and not following an officer’s command should not be sufficient for a person to get shot. Lethal force should be used only as an absolute last resort. Police need to understand how to de-escalate confrontations and use force only as necessary.” – Kathleen Taylor, Executive Director, ACLU of Washington 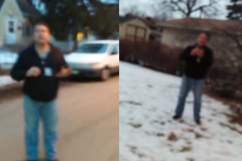 Read More
5 Fast Facts, Police, Shooting, Washington
Antonio Zambrano-Montes is the Pasco, Washington man shot by police officers while fleeing with his back turned and hands up. His death was caught on video.