The guitarist from Slipknot is in hospital after being stabbed in the head. Police say the man who attacked metal god Mick Thompson was his brother, Andrew.

1. Police Think the 2 Brothers Were Drunk

A press release from police in Clive, Iowa, says that Mick and his brother, Andrew, 41, were drunk and fighting with knives outside of Mick’s home in the town. Mick was stabbed in the back of his head. Police arrived at the scene at 4:25 a.m. on March 11. Billboard reports that Mick was “rushed to hospital” following the incident. No charges have been filed yet in the case.

Mick Update: from what I've heard he's okay. We're sendig him all your thoughts. Thank you for that.

Slipknot singer Corey Taylor has been updating fans about the condition of Mick. Taylor tweeted that he was doing his best to get to the bottom of the story. He later said that the guitarist was doing well.

3. Mick Has Trouble Walking Due to Severe Pain

During a documentary interview in 2005, Mick stated that he suffers from severe back pain. So much so that he has difficulty performing and sometimes even walking. The interview was done for DVD Voliminal: Inside the Nine.

4. Mick Lives With His Wife Stacey in Iowa

Thomson is married to Stacey Riley. The couple’s nuptials were held in October 2012, according to Loud Wire. According to her Facebook page, she’s a native of Philadelphia and works in real estate.

Mick Thomson is the lead guitarist in Slipknot, Jim Root plays rhythm in the band. In the band’s consecutive numbering policy, he’s number seven. Mick has the number tattooed on his arm. On Slipknot’s Wikia page, he style of playing is described as, “extremely fast alternate strumming and down-picking.” You can watch Mick talking about his love of guitars above. 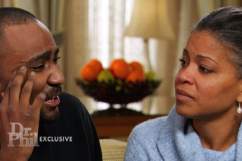 Loading more stories
wpDiscuz
0
0
Would love your thoughts, please comment.x
()
x
| Reply
According to cops in Iowa, Slipknot guitarist Mick Thomson was stabbed in the head by his brother.