Percy Sledge – When a Man Loves a Woman (1966)"When a Man Loves a Woman" is a song recorded by Percy Sledge in 1966 at Norala Sound Studio in Sheffield, Alabama. It made number one on both the Billboard Hot 100 and R&B singles charts. It was listed 54th in the List of Rolling Stone magazine's 500 greatest songs of all time. The sidemen for this recording included Spooner Oldham, organ; Marlin Greene, guitar; Albert "Junior" Lowe, bass and Roger Hawkins, drums. The song is credited to Calvin Lewis and Andrew Wright, who played bass and keyboards with Sledge. However, the song was in fact written by Percy Sledge himself, but he gave it to Lewis and Wright. Before the recording session, the song had no title or lyrics. The session proceeded with the expectation that Sledge would produce them for the vocal takes. When it came time to record the vocals, Sledge improvised the lyrics with minimal pre-planning, using the melody as a guide for rhythm and phrasing. The performance was so convincing that others working on the session assumed Sledge had the lyrics written down.2012-02-04T07:07:50.000Z

The singer of “When a Man Loves a Woman” has died at the age of 73. Percy Sledge passed away at his home in Baton Rouge, Louisiana, at around 1 a.m. on April 14. His death comes just two days before the 49th anniversary of the release of his mega-hit.

In a 1996 interview Sledge was asked about how he dealt with his global fame, to which replied “Well, I am the type of guy that has always been the same all of my life. My class mates at our class reunion always say the same thing. They could not believe that being a world artist, I still seem like I was when we were at school together. We meet every other year. They all have grey hair.” Sledge died after battling cancer.

1. ‘When a Man Loves a Woman’ Was Ranked the 53rd Greatest Song of All Time by Rolling Stone

Sledge will be forever remembered for “When a Man Loves a Woman” which topped the Billboard charts for two weeks in 1966. It was released in 1987 when it got to number two. Then, in 1991, Michael Bolton released a cover which once again reached the top. The song placed at 53rd on Rolling Stone’s list of the 500 Greatest Songs of All Time. The song was used in a 1987 Levis commercial. The song was written by Calvin Lewis and Andrew Wright. The two were in high school when the song was released and were unable to celebrate its success. The song uses both Pachelbel’s Canon and Bach’s Air on the G String, which shows a descending bass line progression.

Sledge pictured with his wife Rosa in 2005. (Getty)

Sledge is survived by his wife, Rosa Sledge. The couple were married in 1980. According to an interview that Sledge did with Blues and Soul, he has 12 kids, 15 grandchildren, and one great-grandchild. In a 2008 interview with Hampton Roads, Sledge explained that Rosa is his second wife and that it’s between his two marriages that he had his 12 children.

3. He Spent 6 Months in Halfway House for Tax Related Offenses

Despite never replicating the success of his major hit, Sledge continued to released modest hits such as “Warm and Tender Love” and “It Tears Me Up.” His last album was his 2013 effort The Gospel of Percy Sledge. In total, he released nine albums throughout his long career. Between 1974 and 1994, he took a 20-year break from recording. The 1994 return was prompted in part to his problems with the IRS, according to the Louisiana Music Hall of Fame. In 1994 he was investigated for failing to report $260,000 worth of income. He was ordered to pay $95,000 in penalties and sentenced to spend six months living in a halfway house in addition to five years probation.

4. He Was a Member of the Rock and Roll Hall of Fame

Sledge being inducted into the Rock and Roll Hall of Fame. (Getty)

He was a member of the Rock and Roll Hall of Fame, having been inducted in 2005, as well as a member of the Delta Music and Louisiana Halls of Fame. In the later years of his career, Sledge experienced huge success touring in the United Kingdom and in Africa.

5. Sledge Got His Start While Working as an Orderly at a Hospital

Speaking to KATC, Sledge’s representative, Steve Green said, “He was a wonderful guy in a terrible business. He was truly a standout.” Sledge was a native of Leighton, Alabama, according to an Al.com profile. Through his first job working as an orderly at Colbert County Hospital in Sheffield, Alabama, he met record producer Quin Ivy. The two struck up and friendship which launched Sledge’s singing career. Music critic David Marsh described Sledge’s output as “emotional classics for romantics of all ages.” 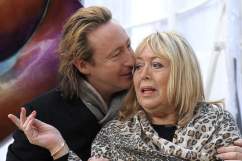 Read More
5 Fast Facts, Breaking News, Celebrities, Deaths, Music, R.I.P.
The singer of "When a Man Loves a Woman" has died at the age of 73.