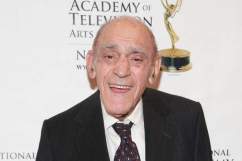 
Abe Vigoda played a detective named Phil Fish in the ’70s show “Barney Miller.” Years earlier he was in “The Godfather II.” (Getty)

People’s boner turned out to be a case of life imitating art as a 1975 episode of Barney Miller centered around Fish rectifying his death after reading Phil Fish’s obituary in the newspaper. (And hilarity ensues.)

He was 62 when People reported his death.

Just in case you were curious, Abe Vigoda is still alive, turned 94 on Feb. 24. He has the best deadpan in history. pic.twitter.com/KyRLfTOcgX

Here are 5 things you should know about the life and times of Abe Vigoda:

Reports of his demise date back to 1982 thanks to People magazine’s erroneous story. Turns out Abe was performing on stage in Calgary, and he spoofed the pop-culture glossy by posing for a photo in a coffin while holding the erroneous issue.

His advanced-age shtick is popular with David Letterman. Once the late-night host summoned the ghost of Vigoda, who walked onto the set and said “I’m not dead yet, you pinhead!” The audience went nuts.

Meanwhile, abevigoda.com sprang to life in 2001 with the sole purpose of reporting Vigoda’s status.

He started acting at age 17 but straggled for decades until his performance as Sal Tessio in The Godfather. Casting agents for a new cop-comedy TV show loved how he played Tessio and beckoned him to audition for the role of deadpan detective Phil Fish.

Here’s how Vigoda heard about the new show slated to be called Barney Miller:

Heres a scene that captured the essence of Fish:

(Click to buy the entire series of Barney Miller)

Then there was the time he chatted with sexpert Dr. Ruth Westheimer:


And the time he went “Wow” for sugar-free Fresca:


Participants in a poll ranked his 2010 Super Bowl commercial with Betty White as the best:

He has performed on Broadway four times.

Only logical Fish would get his own show, right? You’d think it would last awhile, right?

The spinoff focused on Fish’s domestic side. He and wife Bernice (Florence Stanley) foster five racially mixed kids known as PINS (Persons in Need of Supervision). Todd Bridges (before he rose to fame in Diff’rent Strokes) played one of the kids. Denise Miller, Len Bari, John Cassisi, and Sarah Natoli were the others.

“Fish” ran from February ’77 to June ’78 and died a fast death when, Bridges said, Vigoda demanded more money and didn’t get it.

5. He Danced Onstage in a Wombat Suit During a Phish Show

The “Abe Vigoda Dancers” were part of Phish’s Halloween ’13 Boardwalk Hall show in New Jersey. He revealed himself as the Wombat while the band played the song by the same name.

Abe Vigoda the band named itself after the iconic actor.

Abe and Beatrice Vigoda had one daughter, Carol, and were married from 1968 till her death in 1992.

When Abe dies, the greatest meme of all time will go to the grave with him.

Read More
Abe Vigoda, Comedy, Entertainment, Television
Despite the (many) rumors of his demise, Abe Vigoda is alive at age 94. The star of "The Godfather" and "Barney Miller" has been reported dead many times dating back to 1982.