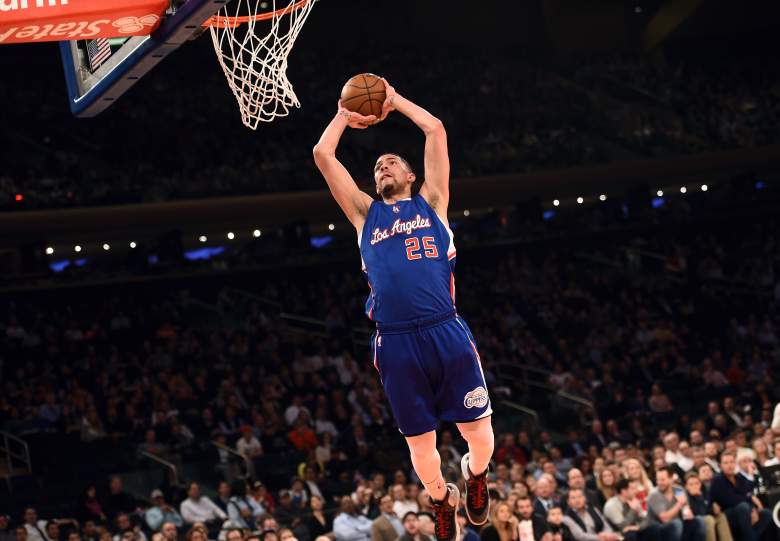 Austin Rivers’s career is soaring with the Clippers. He scored 25 points against the Rockets in Game 3 of the Western Conference semifinals. (Getty)

Austin Rivers shocked most of the NBA world by scoring 25 points Friday night to lead the Los Angeles Clippers to a 125-99 win over the Houston Rockets in Game 3 of Western Conference Semifinals at the Staples Center. Shocking because the 6-foot-4 22-year-old shooting guard who was drafted 10th overall in 2012 went into his 76th career game having scored 20 or more just four times.

And shocking because the former Naismith High School Player of the Year totaled 65 points in the Clippers’ first 9 games of the 2015 playoffs. So it looks like the coach’s son may be well on his way in the NBA.

Here’s what you need to know about Austin Rivers: 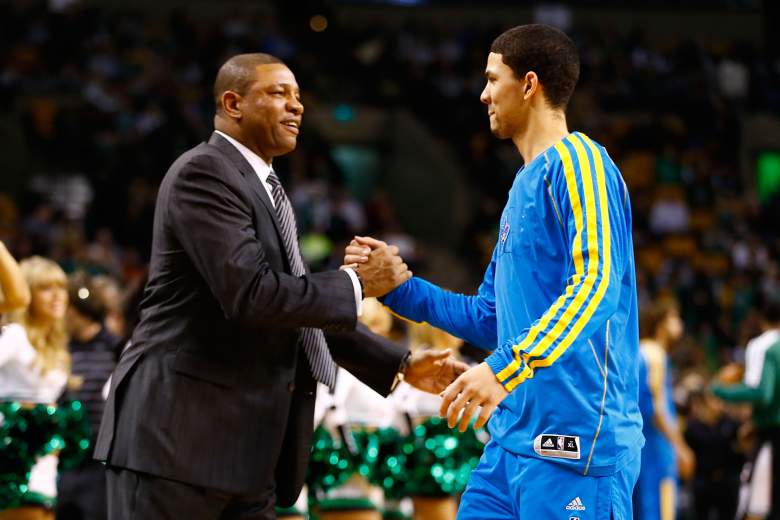 Doc and Austin Rivers exchange a little family love in 2013 when Dad coached the Celtics and Austin was a rookie on the Pelicans. (Getty)

The Rivers family made NBA history on January 16, 2015, when a trade sent Austin to the Clippers — the first time a father had coached his son in the NBA. Austin played that night against LeBron James and the Cavaliers and scored 0 points in 11 minutes.

2. Dukie Slayed the Tar Heels at the Buzzer 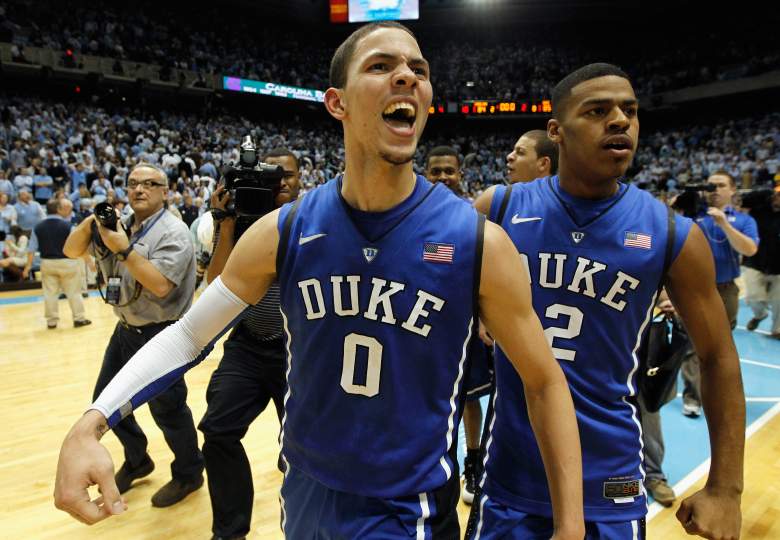 Rivers slayed the Tar Heels with a buzzer-beater in 2012. (Getty)

Austin showed flashes of greatness at Duke and became an instant legend in Raleigh, North Carolina — and despised in Chapel Hill — after hitting a 3-pointer at the buzzer to give the Blue Devils an 85-84 win on February 8, 2012. He finished with game with six 3’s and 29 points, and his dagger ended North Carolina’s 31-game winning streak at the Dean Smith Center. Austin left Duke after one season.

3. He Is Named After Former NBA Players

Doc Rivers named his son after Austin Carr, one of the great scorers in NCAA history at Notre Dame — record 61 points in a tournament game — before playing with the Cleveland Cavaliers. Austin’s middle name — James — is in honor of his uncle (and ex-NBA’er) Jim Brewer

Austin is the son of interracial parents, Glenn “Doc” Rivers and Kristen Campion. Here’s how they met in Wisconsin decades ago when Doc played at Marquette, courtesy of fagwags.com:

Meet Kris Campion Rivers, wife of NBA star player and coach Glenn “Doc” Rivers. Kris and Doc met when they were freshmen in college at Marquette University in Milwaukee back in 1979. She met Glenn one day after class. He walked past her and said, “You know, you’d be kind of pretty if you washed your hair once in a while.” Kris Campion was too astonished to be offended. “He came back and said, `Now I don’t want to give you the wrong idea. I don’t want to date you. But I have a friend I might want to fix you up with,’ ” Kris said. The friend was basketball teammate Marc Marotta. He and Kris dated for a year or so, but one summer, he went overseas, and when he came back, Kris and Glenn had fallen in love.

Austin’s older brother Jeremiah played basketball at Georgetown and Indiana. His older sister Callie played volleyball for the University of Florida then professionally in Puerto Rico, and younger brother Spencer is a guard at UC Irvine, which made this year’s NCAA Tournament.

4. He Was Ranked the No. 1 Player in High School

Austin Rivers Goes OFF For 42 Points at City of Palms! The Best Player In The Nation!Check out the top ranked player in the nation by almost every scouting service, 6'5" Austin Rivers of Winter Park High School going off for 42 points against Dwyer High school at the City of Palms. The son of Celtics coach Doc Rivers has already has a NBA ready offensive game and the scary part…2010-12-21T07:04:58.000Z

Winter Park won its first Florida 6A state title in 2010 thanks to Austin’s 23 points then repeated in 2011 when he went for 25 points, 11 rebounds and 4 steals. He earned the Naismith Prep Player of the Year Award in 2011 and several other distinctions: All-American, All-State, and he played at the 2011 Nike Hoop Summit for Team USA.

ESPN named him the top shooting guard recruit from the Class of 2011. 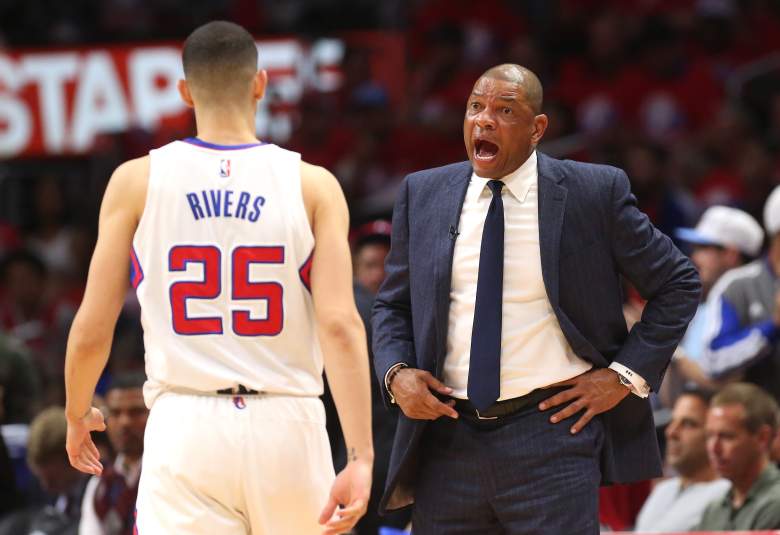 Doc Rivers caught flack after trading with the Celtics to bring his son Austin to the Clippers midway through the 2014-15 season. (Getty)

All $7 million is guaranteed. He becomes a free agent after the season but hasn’t hinted where he wants to play in the future.

Clippers fans made him feel loved after his breakout performance.

They are chanting Austin Rivers in the Staples Center! pic.twitter.com/JHFBzZ4Loa

Austin’s girlfriend might want him to think about staying in L.A. too. 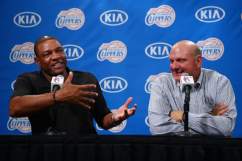 Read More
Los Angeles Clippers, NBA, NBA Playoffs 2015
Austin Rivers shocked most of the NBA world by scoring 25 points to lead the Clippers to a 125-99 win over the Rockets in Game 3 of Western Conference Semifinals.