Meet America’s next star witness. A star on the hit show So You Think You Can Dance, Courtney Barnes, gave a graphic and colorful description of a non-fatal car accident he witnessed on June 8. The video of his report has gone viral and it will surely make him a star, because, apparently, his dancing won’t.

1. Barnes Was On His Way to Burger King for a ‘Bite of Burger’ When He Witnessed the Crash

Mississippi News Now reports that the crash involved a cop from Jackson, Mississippi, who was hit while he drove his cruiser on June 8. The station says that he was hit by a man driving a white van who fled the scene. That man was evading separate officers who were chasing him. In his description of the incident, Barnes says that he was on the way to Burger King but after seeing the crash he lost his appetite, he has a much better way of putting it.

2. According to One Review of Barnes’ Dancing Skills, He Isn’t the Best

In an AV Club review of Barnes’ first appearance on So You Think You Can Dance it says that he isn’t the best dancer, but the review did compliment his energy. During that appearance, Barnes was able to secure a ticket to Las Vegas after begging the judges. A scene which the review says is difficult to watch. One commenter on the review opines that Barnes made it through the round in an attempt to get people not to watch the show.

He’s getting a lot of support on Twitter with even Nicki Minaj tweeting about Barnes, referencing his “piece of burger.”

.@WLBT needs to bring back The Bottom Line and have Courtney Barnes host. They would put the other stations out of business.

4. The Officer Injured in the Crash Will Be Okay

A less interesting witness, named Ruby Evans told Mississippi News Now that “[The officer] was thrown from the drivers seat to the passenger seat and his head hit the window and his head shattered his passenger seat window. The police officer and whoever it was they ran.” The injured cop is a 10-year veteran of the Jackson force and has not been named.

5. Barnes Will Likely Get His Own Auto-Tune Track Soon

Barnes looks set to become America’s next star witness, following in the footsteps of Antoine Dodson and Sweet “Ain’t Nobody Got Time For That” Brown. It shouldn’t be long before Barnes has his own auto-tune track. 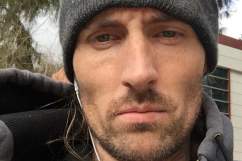