James Woods is suing a Twitter troll for $10 million after the Ray Donovan star was called a “cocaine addict” by the user @AbeList. List has since deleted his Twitter account. According to the suit, Woods wants $10 million because he feels like he was defamed by the troll.

The Hollywood Reporter says that Woods went to the Los Angeles Superior Court on July 29 to file the lawsuit. On July 15, in response to a rant that Woods was on about media priorities:

The complaint says that @AbeList “Stepped over the line” and that he defamed Woods by calling him a “Cocaine Addict,” as well as other names. According to Woods, “[He] is not now, nor has ever been, a cocaine addict, and AL had no reason to believe otherwise. Rather, AL’s outrageous claim is the culmination of a malicious on-line campaign by AL to discredit and damage Woods’ reputation, a campaign which began as early as December 2014.” The actor also says that his good name has been “jeopardized.”

2. This Lawsuit Could Forever Change How People Talk to Each Other on Twitter

According to NOLO, the rules for suing someone over a Twitter spat are complicated. The site says:

This is a complicated issue that depends on what state you live in, what state the alleged defamer lives in, and the contacts that the defamer has had with your state, if any.

In 2012, a British politician, Alistair McAlpine, sued 10,000 Twitter users who named as a suspect in a child sex scandal. McAlpine later settled the suit in exchange for each tweeter making a charitable donation.

4. It Isn’t Mentioned in the Suit if Woods Ever Reported @Abelist to Twitter

The complaint does not mention if Woods ever took his issues with Abe List directly to Twitter, or if he ever used the site’s block function. He did however tweet this the day after List called Woods a cocaine addict:

5. James Woods Is No Stranger to Lawsuits

Going all the way back to 1988 when he sued his Boost (above) co-star Sean Young, accusing her of stalking him. She countered that Woods had reacted badly when Young rejected his advances. More recently, in 2006, Woods sued Kent Hospital in Warwick, Rhode Island, after his brother, Michael, died at the facility. He accused the hospital of negligence. Both of his lawsuits were settled out of court. 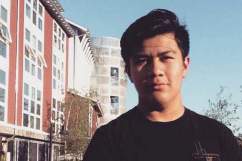