A graphic comparing the facial expressions Donald Trump made last night at the GOP debate on CNN with those of serial killer Charles Manson’s “I’m nobody” interview has gone viral.

Last night during the debate, the internet was abuzz with Trump’s priceless, candid reactions to his opponent’s statements.

The clip of Trump’s facial contortions quickly went viral, but it took someone extra special to realize how similar it was to serial killer Charles Manson’s response in his 1989 interview with Penny Daniels.

Redditor supersonic3974 noticed the similarities and made the comparison GIF above.

The clip comes from Manson’s response to Daniels’ question: “Who are you?”

After a slew of crazy facial expression, Manson says: “I’m nobody. I’m a tramp, a bum, a hobo. I’m a boxcar and a jug of wine, and a straight razor if you get too close to me.” 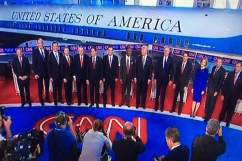