The wife and son of a deceased police officer are under investigation in the death and corruption of Lieutenant Charles “Joe” Gliniewicz. He died of a gunshot wound on September 1 in Fox Lake, Illinois, after radioing that he was pursuing three suspects. After a prolonged investigation, on November 4 authorities said that his death had been a well thought out suicide. Lt. Gliniewicz was involved in a money laundering scheme at the Fox Lake Police Department.

His wife, Melodie, and son DJ, along with his other children, released a statement upon hearing of the investigation’s finding. It read “Today has been another day of deep sorrow for the Gliniewicz family. The family has cooperated with the Task Force’s investigation and will not comment at this time. The Gliniewicz family requests that their privacy be respected as they continue to cope with the loss of the beloved husband and father.”

1. Authorities Have Not Confirmed What Role They Think Melodie & DJ Played in the Corruption

Gliniewicz was a volunteer with the local police explorers. (Facebook)

The exact role that police think Melodie and DJ played in the corruption isn’t clear. In announcing that Charles had committed suicide, Lake County Major Crimes Task Force Commander George Filenko said “With those partners, our investigation strongly indicates criminal activity on the part of at least two other individuals.” He also said that investigators believed that Charles took his own life because his theft from a Fort Lake, Illinois, education program was about to be revealed.

A local politician, Anne Marrin, added “The Village fully supports the prosecution of each and every individual who conspired with Lt. Gliniewicz and or has engaged in criminal activity that came at the expense of our community, our police department and those we serve.” Meanwhile, the town’s Mayor Donny Schmidt said “It doesn’t change the fact that he was my friend, he might have had some warts but overall he was a good man and he did much for our youth and our community and he was a public servant for 30 years.” 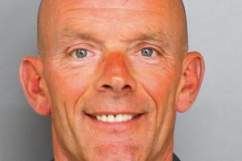 2. Melodie Previously Said ‘I Wholeheartedly Believe [Her Husband] Was Murdered’

In an interview that you can watch at the top of this article, Melodie told Crime Watch Daily “I wholeheartedly believe he was murdered.” Meanwhile, DJ said that his father had “never once had a single suicidal thought in his life.” He added “”For someone who didn’t know him to go out and question that, then also release information that could jeopardize the investigation…. My entire family isn’t happy.” Melodie reiterated these statements saying “There were things that were happening in our life that people who are going to commit suicide would never do…. We lived for these things.”

3. DJ Followed His Father Into the U.S. Army

According to his Facebook page, DJ followed his father’s footsteps into the U.S. Army. The announcement of his father’s suicide came on DJ’s birthday. On October 20, he posted that it was the first day of him wearing a memorial patch for his dad.

Gliniewicz, known affectionately as “G.I. Joe” in the community, was an Army veteran and was the longtime leader of the local police explorers, working with youth interested in law enforcement, the Northwest Herald reports.

He served in the Army from 1980 until 2007, in active duty and then as a reserve, leaving as a first sergeant, he newspaper reports.

He earned a master’s degree in criminal justice from Kaplan University, according to his Facebook page.

4. Charles Spent Some of His Ill-Gotten Money on ‘Adult Websites’

NBC Chicago reports that Charles’ spent his money on flights, a gym membership and adult websites. Investigators used text and Facebook messages in their attempts to uncover the circumstances of Charles’ suicide. In one message, the deceased officer says that if a Lake Village Administrator “gets ahold of the checking account I’m pretty well f**cked.”

He had been stealing from the Fox Lake Police Explorer program, which helps teenagers learn what it takes to become a police officer. Charles’ theft is thought to have been in the “five figures.”

5. Melodie & Charles Were Married for Over 26 Years

In July 2015, Charles posted on his Facebook page that he and Melodie had been married for 26 and a half years. He regularly posted photos of the couple together.

Read More
5 Fast Facts, Breaking News, Crime
wpDiscuz
1
0
Would love your thoughts, please comment.x
()
x
| Reply
The wife and son are under investigation in the death and corruption of Lieutenant Charles “Joe” Gliniewicz.