A possible ninth planet of immense size may have been discovered -- but is this planet proof of the Planet X mythology? A number of myths and conspiracy theories exist that a mysterious ninth planet lurks out in the shadows of our solar system and is responsible for hurtling asteroids toward Earth and causing past extinction events. This mysterious planet has been called by many names, from Planet X to Nibiru and more. Some theories claim that it will appear again and usher in a new doomsday. Now, scientists have determined that an immense planet likely does exist and accounts for the strange orbits of objects out in the Kuiper Belt. There's no evidence that the doomsday myths are real, but some people are wondering anyway if this announcement is connected to the mythology. Click through the gallery to learn more about the discovery and how similar it is to the most common doomsday myths about a mysterious, shadowy planet. (Caltech/R. Hurt (IPAC) 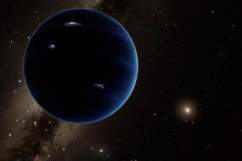