Another series of earthquake-liking shaking and booms were heard in New Jersey today. (USGS/Twitter)

What is causing the ground to shake in New Jersey a second time? Why are residents in New Jersey reporting earthquakes, shaking, and their homes vibrating? Once again, residents in New Jersey are reporting unexplained ground shaking that’s causing their entire house to vibrate. Last week, it was proposed that sonic booms caused the incident. But now it’s happening again and residents are waiting for the military to report back. People are offering numerous theories about the cause this time. With the booms happening a second time, conspiracy theorists are starting to come up with some unique explanations.

The Shaking Has Been Reported in Numerous Locations

The shaking from today has been reported in numerous locations in New Jersey, including Lavallette, Breach Haven, Brick, Manahawkin, Point Pleasant, and Toms River, Breaking 911 reported. The reports included tremors and other ground-shaking events. A resident of South Seaside Park said it felt stronger than last week’s sonic booms. She said she heard a rumble first, then a shaking under her feet. The shaking traveled up and shook her entire house. A resident of Toms River said her dog went into hiding because her house shook so strongly.

Press of Atlantic City reported that around 1:45 pm, a boom shook houses in the Cardiff section of Egg Harbor Township. Shaking was also felt in Ocean County, News Works reported. Some reported the shaking around 12:16 p.m., an hour earlier than reports in other areas. One resident told News Works: “Almost felt as a strong vibration from a pile driver in the back yard.”

So far there have been no injuries reported.

The Cause of Today’s Shaking Is Unknown

@NewsWorksWHYY I am sure it the Military again in the last 10 min had 2 different Helos fly over head. pic.twitter.com/LSFoG72Pij

The cause of the current incident isn’t yet known, although some suspect it’s the military again. Jersey Shore Hurricane News on Twitter said they were getting some comments from military personnel but nothing definitive yet. A resident in one of the affected areas shared the tweet above, saying that two different helicopters flew over shortly after his home shook two times in Mystic Island, New Jersey, lasting about five seconds each.

However, Kryn Westhoven, spokesman for the New Jersey’s Military and Veteran’s Affairs, told News Works that they weren’t aware of anything the military was doing in the region today. The Naval Air Station in Patuxent, MD, the source of last week’s sonic boom, was contacted by News Works. The spokesman seemed surprised and said she would look into it.

Last Week The ‘Earthquake-Like’ Reports Were a Sonic Boom

Last week’s loud boom and shaking was reported to be a sonic boom from military aircraft flying in the area. Military jets flying out of Maryland were making test flights over New Jersey. A meteorological condition called an “inversion” intensified the sound of the sonic boom.

In total, nine sonic booms were reported last Thursday, and they were likely the result of test flights by F-35C aircraft and an F/A 18. On Reddit, one poster said that he was on the McGuire Air Force base and had not heard a single boom or shake today. 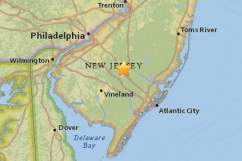 What Caused the Sonic Booms in New Jersey?

Theories Range From the Mundane to the Mysterious

Aliens confirmed. We are not alone. ? (But seriously, I'm freaked!?) https://t.co/M0dAE4cVMD

Not everyone believes the sonic boom theory. So far, theories about the cause of today’s shaking range from the mundane to conspiracy-level mysterious. According to NewJersey.com, some people were concerned that the sonic booms were from aliens. In fact, some are really, really hoping for it:

On the more serious side of things, some people wonder if this could be related to a boom back in 2009 on Staten Island that might have never been explained. The New York Times reported that residents in Staten Island hear a powerful boom (or pair of booms) around 8 pm on a Monday night in 2009. It was so strong that it rattled windows, shook buildings, and caused many to think it was an earthquake. Police investigated many possibilities, including a fireworks explosion, a sonic boom, or a transformer exploding. However, none of the theories panned out. There were no aircraft in the area at that time. Some conspiracies have long theorized that there is an experimental aircraft called an “Aurora” that is hypersonic and could be the source of unexplained rattles and quakes. Many are skeptical of the Aurora theory without more proof.

Some have wondered if this could be caused by fracking, which has been the source of other unexplained quakes in areas that don’t normally have earthquakes, such as in Dallas, Texas. But there are no reports of fracking in New York or New Jersey.