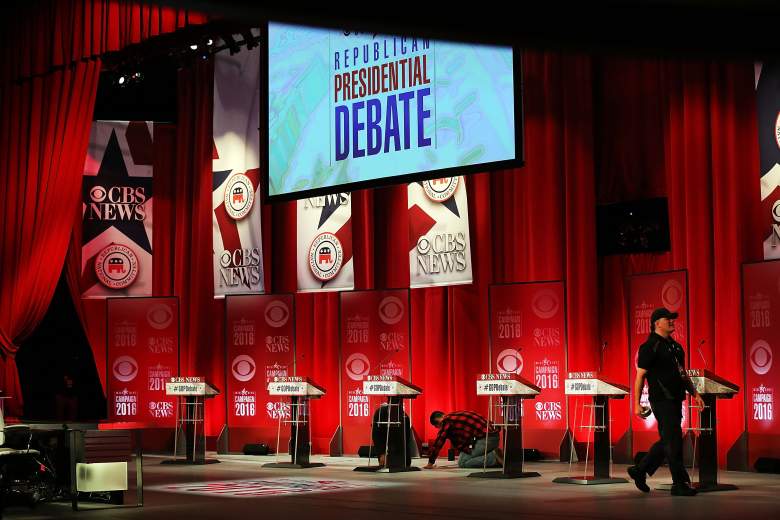 The GOP debate stage shortly before the debate began. (Getty)

Tonight’s GOP debate comes just one week from the South Carolina primary, a pivotal turning point in the campaign for far-behind candidates like Jeb Bush and Ben Carson, as well as a crucial time for Marco Rubio and Ted Cruz to separate themselves from the pack in their race to chase down South Carolina and national frontrunner Donald Trump. The debate saw fiery exchanges about President Bush’s legacy, foreign policy, taxation and health care.

Read our recap below, then vote for your favorite in the poll at the bottom of the page.

The debate opened with a moment of silence marking the passing of Supreme Court Justice Antonin Scalia, and his passing inspired the first round of questions.

Trump didn’t deny that Obama’s prerogative was to select the nominee, but advocated a “delay, delay, delay” strategy to give the political process time to sort itself out.

Kasich echoed the President’s wishes to avoid polarization in urging the President not to immediately appoint Scalia’s replacement:

Carson criticized the idea of lifetime Supreme Court appointments as a relic of the shorter life expectancy in the era the Constitution was written:

Rubio pointed out the trend-breaking of having a “lame-duck” President appoint a Supreme Court Justice:

Cruz spoke of his experience with the Supreme Court to underscore his “judgment” in picking a Justice:

Voters must determine who has the judgement to nominate principled constitutionalists to the court https://t.co/MJuREMzPc9 #GOPDebate

Jeb Bush addresses the possibility of a "litmus test" for Supreme Court nominees: "Not on specific issues. Not at all." #GOPDebate

Donald Trump was asked the first three questions he’d have for his foreign policy experts:

3 critical questions for Trump, if elected: "What we want to do, when we want to do it and how hard we want to hit." https://t.co/aP9BFIYnJS

Jeb Bush: "We need to destroy ISIS and dispose of Assad." #GOPDebate

Trump continued his stragegy of immediately attacking Bush (and a less-than-receptive audience) following his comments:

.@JebBush to @realDonaldTrump: "This is a guy who gets his foreign policy advice from 'the shows'" #GOPDebate

The exchange sparked a round of debate about the Bush legacy, with Marco Rubio claiming that he “thanked God” President Bush and not 2000 rival Al Gore was in office during 9/11 and Kasich praising Colin Powell while admitting he did not ultimately believe the decision to invade Iraq was the right one.

Cruz criticized the Iran deal, a common refrain from the Senator:

That’s why I’ve promised to rip the Iranian nuclear deal to shreds on day one. #GOPDebate https://t.co/XJbM7WYAAg

Kasich talked about the “opportunity to lead” in the Arab world:

.@JohnKasich says the U.S. needs to be more aggressive in the Middle East. Do you agree? #GOPDebate pic.twitter.com/NgWvd15Ar1

These are the top national security priorities Marco would address as president: #GOPDebatehttps://t.co/FWESw7z8ht

Trump promised to save Social Security by eliminating waste, fraud and abuse.

Cruz defended his value-added tax proposal, saying it would drastically simplify the IRS:

I’ve proposed a simple flat tax of 10% that will let Americans file their taxes on a postcard: https://t.co/L5m9XTho5j #GOPDebate

Bush and Kasich exchanged harsh criticisms about the health care approaches each took as governor:

Cruz pointed out the worst victims of the struggling economy:

.@tedcruz: "The people who have been hurt the most in the Obama economy have been the most vulnerable." #GOPDebate

He claimed that the answer was to eliminate regulations to allow economic growth and reform welfare to encourage productivity.

Rubio echoed his concerns, and proposed a similar approach, later in the debate:

Trump reiterated his belief in building a wall at Mexicos defense, while Rubio defended the idea of a path to citizenship for undocumented residents.

Cruz criticized Rubio, including a jab at an interview on Univision.

When Dickerson asked about Trumps flexibility on his positions:

He defended his use of eminent domain, and criticized Jeb Bush for his inconsistency in condemning Trump’s use of the maneuver while his brother used the same as Governor of Texas.

Rubio and Cruz had a memorable exchange on immigration ending with this line:

When the topic turned to conservatism, the gloves came off between Trump and Cruz:

.@RealDonaldTrump and @TedCruz have had harsh words for each other throughout the #GOPdebate https://t.co/yFsDhihJK8 pic.twitter.com/zJCiHTWVxM

"I don't know how Ted knows what I said on Univision. He doesn't speak Spanish." Damn, Marco! #GOPDebate

Trump, on Cruz: "Nasty guy. Now I know why he doesn't have one endorsement from any of his colleagues." #GOPDebate https://t.co/9DjeVkojAn

Carson tried to set himself apart with a similar approach:

Carson: People have told me to scream, jump up and down like Trump-Cruz fight. "Is that really what you want? I don't think so." #GOPDebate

Kasich emphasized unity and his goal of empowering all Americans:

.@JohnKasich: The spirit of America rests in all of us. #GOPDebate

Carson invoked the forecasts that the current generation would be the first not to economically outperform their parents, and offered his candidacy as a turnaround:

1/2 @RealBenCarson: nothing normal about not doing better than our parents. #GOPDebate

Bush cited his experience to deal with the “unprecedented challenge” that the next President would see:

.@JebBush: "I believe I will have a steady hand as Commander in Chief and President of the United States." #GOPDebate

Rubio called to mind the struggle of Americans and what he termed a collapse of America’s strength and values, then pledged to be the “turning point:”

.@marcorubio: "All the things that once held our families together are now under constant assault." #GOPDebate

Cruz played up his conservative credentials and willingness to stand up for Republican ideals:

.@tedcruz: "Our country hangs in the balance. Do you want another Washington deal maker or do you want a proven conservative?" #GOPDebate

Trump lamented the lack of “winning” in current American policy, then said he would be “working for you, not working for anybody else.” 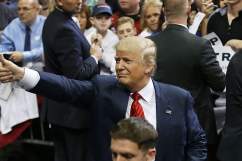 GOP Polls for Feb. 13: State of the Race in South Carolina & Nevada