Tesla Motors unveiled its Model 3 tonight, touted as an affordable electric car for everyone. The cutting edge company is also taking preorders for the car at Tesla retail stores. Online reservations started an hour before the big reveal, at 7:30 p.m. Pacific. (To see our comparison of the Tesla Model S and Tesla Model 3, please see our story here.)

The Tesla Model 3 unveiling started at 8:30 p.m. Pacific (11:30 p.m. Eastern.) You could watch the webcast live on Tesla’s webpage here. That webpage wasn’t working for everyone, so a second webpage that required your email and name to view the broadcast was available here. Now that the broadcast is over, you can still watch the YouTube video of the livestream above.

The car will start at $35,000, available for preorder with a $1,000 reservation, and running about 200 miles between charges. The car is currently scheduled to go into production in late 2017.

Tonight’s unveiling, according to CEO Elon Musk, will just be “Part 1.” A Part 2 reveal will take place closer to production.

Tomorrow is Part 1 of the Model 3 unveil. Part 2, which takes things to another level, will be closer to production.

Tonight’s unveiling will allow the public to see the car very clearly, according to Musk, but some elements may evolve later. 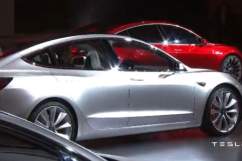 Read More
Breaking News, Tesla Motors
The Tesla Model 3 was unveiled tonight. Even if you missed the live broadcast, you can still watch the unveiling right here.