Nashville’s reigning Police Officer of the Year suffered a head injury after he was attacked by multiple assailants in a city housing project as bystanders cheered and filmed cellphone video, police said. The alleged attack on Officer Matthew Cammarn, which can be watched above, occurred at the James A. Cayce Homes on the evening of April 12. Officer Cammarn was responding to a call of shots fired in the area and was trying to make an arrest when the incident occurred. He’s an officer in the Eastern Precinct of the Nashville Police Department.

1. Officer Cammarn Was Cop of the Year in 2015 After Saving the Life of a 17-Year-Old Gunshot Victim; a Fire Dept Official Said Cammarn Was the ‘Only Reason’ the Teen Survived

In February 2016, Cammarn was honored as Nashville’s Officer of the Year by Chief Steve Anderson. Chief Anderson said at the time:

Officer Cammarn’s quick medical response to a 17-year-old gunshot victim on N. 8th Street is credited with saving the young man’s life. Officer Cammarn was on walking patrol near the shooting and was first on the scene.

The teen had been shot in his upper thigh and a major artery had been struck. Officer Cammarn immediately applied a tourniquet from his MNPD medical kit that controlled the bleeding until medical personnel arrived.

At the time of the incident, Cammarn described being on patrol on a Friday night in July 2015 in an interview with WKRN. He said that a teenager had just been robbed and shot inside his apartment. Cammarn added, “There was blood all over the place. There was blood on me. There blood on his pants.”

Captain John Narramore with the Nashville Fire Department told WKRN that Cammarn was the “only reason” the teenager was still alive.

2. A Man Named Brian Shannon & a 17-Year-Old Juvenile Have Been Arrested in the Case

22-Year-Old Brian Shannon has been arrested by police in Nashville after the attack on Cammarn. (Nashville Police Department)

According to the Nashville Police Department, a 22-year-old man named Brian Shannon and a 17-year-old juvenile have been arrested after the attack on Cammarn. A press release said that Shannon was being charged with “felony aggravated assault on a police officer, resisting arrest, evading arrest, criminal trespassing, disorderly conduct and drug possession.” The teenager is being charged with aggravated assault on Cammarn and evading arrest.

Police officials described the incident in the video at the top of this article as:

Cammarn told Shannon to put his hands behind his back and attempted to take him into custody.

Shannon pulled away, grabbed Cammarn and pulled him to the ground. While actively fighting and swinging his fists at Officer Cammarn on the ground, other persons in a crowd pulled and pushed Cammarn in an effort to free Shannon.

Others stood by recording the assault on their cell phones.

NBC Nashville reports that Shannon is being held on a $37,000 bond.

3. Officer Cammarn Suffered a Head Injury & Was Released From a Local Hospital on the Morning of April 13

The press release on Cammarn’s assault said the he was being treated at Vanderbilt University Medical Center. He checked out of the medical center the day after the attack.

4. He Is a Republican, Army Vet & Goes by the Nickname ‘Lil Piggy’

On his Facebook page, Cammarn describes living in Nashville with his wife and their young kids. He’s a native of Clyde, Ohio and is a U.S. Army Veteran as well as a member of the motorcycle club the Music City Defenders. Cammarn goes by the nickname Lil Piggy.

He joined the Nashville Police Department in 2013 after a period as a corrections officer. In his “About” section, Cammarn refers to himself as a Republican. He wrote on his page in December 2012, “Gun control. Hmmmmm whats the difference between a woman deciding to have an abortion, killing a living being, or someone killing other people.” Cammarn also posts pro-gun memes on a regular basis.

5. This Is the Same Projects Where Officer Josh Hausman Was Stabbed on April 10 While Trying to Break Up a Fight

The attack on Cammarn came less than 24 hours after Officer Josh Hausman was stabbed in the same projects. He was slashed in the hand while trying to break up a brawl, reports NBC Nashville. Hausman and Cammarn are friends on Facebook.

In their press release after the attack on Cammarn, the Nashville PD said, “Flex officers from the East and Central Precincts are maintaining a visible presence in the N. 7th Street area as Officer Cammarn was the second officer to be injured in that immediate area in as many days.” 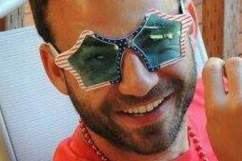