Today's primary in New York will likely be a historic one, with thousands of people reportedly lost from voter registration rolls in Brooklyn, thousands more discovering that they can't vote because their party affiliation was changed, and an emergency lawsuit seeking to give all these people the right to vote in a closed primary. We're documenting everything that's happening in the primary and reports of voting problems that may be surfacing.

On Facebook, Reddit, Twitter and many other locations, the stories are numerous. Michelle Mraz shared on Facebook: "My son met the deadline to register to vote in the New York primary. He got to his polling location this morning and was told his name was not on the voter list. He will have to vote by provisional ballot. It took so long, that he couldn't stay and had to go to class. Hopefully he will go back later today. The election official told him that this was happening to many, many people at that location."

If you run into problems voting, your best option is to seek a court order from a judge on call. Read more about how to do that in this story. Otherwise, file an affidavit or provisional ballot if you don't have time to seek a court order. A lawsuit in New York is seeking to make sure these ballots count, but we don't know yet what the result of the hearing will be. Click through the gallery to see photos from people at the primaries, tweets about voting, and stories from people who encountered unexpected problems at the polls. (Getty) 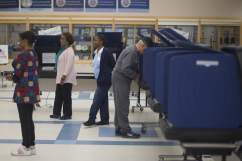 What Can You Do If You’re Not Allowed to Vote in New York?

Read More
Breaking News, New York, Politics
We're documenting voter issues and problems during the New York primary. These are the photos and stories you need to see from poll places at the #NYPrimary.