Crime scene photos showing the dead body of Reeva Steenkamp, who was murdered by Oscar Pistorius in 2013, have been made public after her father pleaded for them to be released to show what Pistorius did to his daughter.

The photos were released by the Pretoria High Court after Barry Steenkamp made his request. Prosecutors agreed to allow the photos to be seen. Pistorius, a double amputee, is facing sentencing on a murder charge for the February 2013 death of Steenkamp, a South African model who was the Olympic sprinter’s girlfriend.

The photos show the bloodied head of Reeva Steenkamp after she was shot by Pistorius, who claimed he mistook her for a possible intruder when he shot through a bathroom door on Valentine’s Day.

You can see the graphic photos below:

Exhibit pictures of Reeva Steenkamp are seen after the court released them to be published on June 15 in Pretoria, South Africa. (Pretoria High Court/Getty) 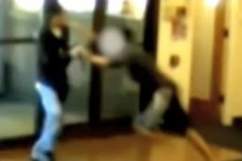 “Isn’t it time we now finally let the world see what this accused did with four Black Talon rounds through a door?” chief prosecutor Gerrie Nel said in court, according to The Guardian.

Reeva Steenkamp in February 2013, days before she was killed. (Duif du Toit/Gallo Images/Getty)

The Black Talon rounds disintegrate into sharp metal fragments when they hit human flesh, causing horrific injuries, according to News 24.

Police previously released other crime scene photos, showing the gun Pistorius used, the bloody bathroom and a blood-covered Pistorius. You can see those photos below:

Oscar Pistorius after the shooting.

The bathroom where the shooting occurred.

The gun used in the shooting can be seen in this crime scene photo.

Reeva Steenkamp’s father talked about the impact the shooting has had him and his family during court on Tuesday. You can watch the testimony of Barry Steenkamp below:

During a hearing in the same re-sentencing proceedings, Pistorius walked around the courtroom without his prosthetic legs to demonstrate his disability in an effort for sympathy, the BBC reports. Pistorius’s legs were amputated below the knees when he was a baby.

“It is three o’clock in the morning, it is dark, he is on his stumps,” his attorney, Barry Roux, said in court, stressing the vulnerability of his disabled client, according to the BBC. “His balance is seriously compromised and… he would not be able to defend himself. He was anxious, he was frightened…He believed the person in the toilet was an intruder and deceased was at the time in the bed.”

“He knew there was someone behind the door,” prosecutor Gerrie Nel said during the resentencing. “Using a lethal weapon, a loaded firearm, the accused fired not one but four shots to the toilet door. He failed to provide any acceptable version for his conduct.”

Pistorius will be sentenced on July 6, 2016, by Judge Thokozile Masipa. His defense attorneys have argued that there is no purpose in sending Pistorius to prison, instead asking for community service. Prosecutors have asked for a minimum of 15 years and Barry Steenkamp has begged the judge to send Pistorius to prison.

Pistorius, a six-time Paralympic-gold medalist who, in 2012, became the first amputee sprinter to compete in the Olympics, was previously convicted of manslaughter, but the conviction was overturned and upgraded to murder. He had served one year in prison on the manslaughter conviction before being released to house arrest.

Loading more stories
wpDiscuz
205
0
Would love your thoughts, please comment.x
()
x
| Reply
Reeva Steenkamp's dead body is seen in graphic crime scene photos released after her father pleaded for them to be made them public to show what Oscar Pistorius did to her.