During a campaign rally in Greensboro, North Carolina tonight, Donald Trump suggested that soldiers stole money during the Iraq War and are “living very well, whoever they may be.”

Trump said that the U.S. should have taken oil from Iraq when the military left. He blasted the pundits who said that Iraq was a sovereign country since the country was “crooked as hell.” He then criticized the idea of bringing money to Iraq to hand out to local leaders.

“How about bringing baskets of money… millions and millions of dollars and handing it out? I wanna know, who were the soldiers that had that job?” Trump said. “Because I think they’re living very well right now, whoever they may be.”

Trump has brought this up in the past. The Guardian reported in October that Trump suggested the Afghan and Iraqi government kept money the U.S. brought to their countries for themselves.

“I want to know who are the soldiers carrying suitcases with $50 million?” Trump said at the time. “How stupid are we? I wouldn’t be surprised if those soldiers, if the cash didn’t get there.”

Realized I posted a somewhat incomplete transcription before of Trump in Keene on 9-30-15 pic.twitter.com/cGYH4KlYTq

It was reported during the war by The Guardian that the U.S. sent billions to Iraq and then lost track of the money. In March 2013, an auditor’s report to Congress showed that much of the money spent on reconstruction grants were wasted. 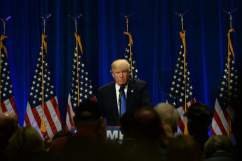