Elizabeth Trump Grau works in the banking industry. She and her husband, James Grau, were married in 1989. She's a graduate of Kew-Forest School and Southern Seminary College in Buena Vista, according to her 1989 wedding announcement. Her husband is a film producer. The photo above was shared on Facebook by Terry Bomar in 2011, showing Elizabeth Trump Grau (left) and her husband Jim (right) at the YA Out of Africa Ball. (Facebook/Terry Bomar) 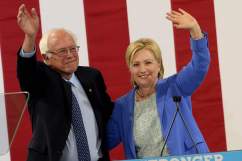 Why Can Cruz Speak Without Endorsing Trump, but Bernie Had to Endorse Clinton?

Donald & Melania Trump at the RNC: The Photos You Need to See