A deranged father shot-and-killed his wife and daughter in a shocking murder/suicide in a quiet English town. The gunman has been named as Lance Hart, 57, of Spalding in Lincolnshire. The victims have been named as his wife, Claire, 50, and their daughter, Charlotte, 19. The gunfire broke out at around 9 a.m. local time close to a public swimming pool in the village.

1. One Witness Said She Heard 2 Loud Bangs Followed by Silence & Then a Third Bang

Police officers stand outside forensics tents near the scene of the shooting.

A witness told the Daily Telegraph that she heard two loud bangs, followed by silence and then another loud bang. Sky News reports that swimmers and workers at the community pool came out to find the three members of the Hart family lying wounded. Paramedics rushed to the scene and attempted to save the wounded, all three were later pronounced dead. Officials were quick to state that the shooting was not terror related.

A spokesman for the East Midlands Ambulance told the media, “Upon arriving at the scene, our paramedics treated three patients who had gunshot wounds. Despite the best efforts of everyone at the scene the patients were pronounced dead.”

2. The Town Where the Shooting Happened Has Been Described as a ‘Safe, Residential Area’

A resident of the town told the Daily Telegraph that Spalding is a “safe, residential area.”

Shocking events in Spalding, Lincolnshire. My thoughts are with the victims and their families

In response to the killing Labour party leader Jeremy Corbyn tweeted, “Shocking events in Spalding, Lincolnshire. My thoughts are with the victims and their families.” After the attack, local schools went into lockdown, reports the Stamford Mercury.

The weapon used in the killings was a shotgun, reports Sky News.

3. Charlotte Hart Was Studying at the University of Northampton

Charlotte Hart was a student at the University of Northampton at the time of her death, according to her Twitter page. She is survived by her older brothers, Luke, 26, and Ryan, 25, reports the Daily Telegraph. Photos from her Instagram page show that Charlotte had recently been on vacation on the Spanish island of Tenerife. In her bio on social media, Charlotte describes herself as “happily taken” and adds that “dogs are [her] life.” A recent post indicates that one of her dogs died a week before the shooting.

In one Instagram post, a month before her death, Charlotte wrote that she had been with her boyfriend, Ben, for eight months.

The Lincolnshire Echo reports that Charlotte made an award-winning film about paramedics when she was 14. The newspaper also says that earned her A levels in Biology, Geography and Psychology.

4. A House in the Area Is Being Searched By Police in Relation to the Killing

Sky News reports that a house in Hatt Close in the village of Moulton, close to Spalding, is being searched in relation to Lance Hart’s murders. Peterborough Today reports that the home is valued at $360,000. He is believed to have lived in the home at the center of the search. A neighbor told the Daily Telegraph about him saying, “He is a very, very nice guy, but I don’t know his wife and I don’t know the rest of his family. He went out of his way to be helpful so it comes as a great shock. He was full of the joys of spring.”

ITV reports that Lance Hart worked in construction. Another neighbor told Peterborough Today that Lance was the “nicest guy you could ever meet” and that he “would do anything for anyone.” The website adds that Lance and Claire were married in 1990 and had lived in Moulton since 2009. That neighbor, a woman, said “They were a lovely couple.”

5. Despite Being a Domestic Related Murder/Suicide; A Right-Wing Newspaper Attempted to Blame the Killing on Migrant Workers

The pro-Brexit and anti-immigration newspaper, the Daily Express, attempted to blame the shooting on “warring migrant towns” in Spalding, in an early report. A right-wing politician, Victoria Ayling, had told the Express upon hearing of the shooting, the local reaction was, “Oh God, it’s the gang warfare again.”

Since the United Kingdom voted to leave the European Union, there has been a sharp rise in anti-immigrant sentiment in England. 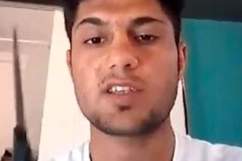