Montrell Jackson was one of the three officers killed. (Facebook)

Three police officers, including Montrell Jackson, 32, were shot and killed in Baton Rouge, Louisiana, where it has been tense with police since the death of Alton Sterling on July 5. Police say that one suspect, identified as Gavin Long, was killed. Police did question two men, who were later released, The Advertiser reports.

The other Baton Rouge Police Department officer killed was 41 years old and was later identified as Matthew Gerald. The East Baton Rouge Parish Sheriff’s deputy was 41, reports The Advocate.

Three officers were wounded in the shooting, including one who is fighting for his life.

Although police did not reveal the names of the victims in a 3 p.m. press conference, Jackson’s cousin, Josh, confirmed his identity on Twitter:

Rest in peace to my cousin Montrell Jackson who was one of the policeman that was killed. #PrayForBatonRouge

Here’s what we know so far about Montrell Jackson and the shooting. This is a breaking story and will be updated as we learn more.

Dude just had a baby a couple months ago!! Y'all took him from a family that needed him!

One of Jackson’s cousins, who identifies himself as @RealDruBankz on Twitter, wrote that he welcomed his son just a few months ago. “Dude just had a baby a couple months ago!! Y’all took him from a family that needed him,” he wrote.

The Advocate reports that Jackson was a 10-year veteran of the Baton Rouge Police Department.

This is Montrell Jackson. One of the cops killed in #BatonRouge this morning. His 4mo old son is now w/o a dad. pic.twitter.com/r3CcLGD4Pi

Writer Britni Danielle wrote that Jackson’s baby was born in March. On his Facebook page, Jackson wrote of his son, “I wouldn’t trade him for the world though.”

A family friend of Montrell Jackson said he was one of the officers killed in #BatonRouge. He and his wife just had a baby in March.

2. Jackson Wrote on Facebook That ‘I Wonder if his City Loves Me’ After Dallas Shooting

Jackson posted the above message on his Facebook page on July 8, the day after five police officers were killed in Dallas. It also came after the death of Alton Sterling, whose death in Baton Rouge was captured on video and sparked protests.

“I’m tired physically and emotionally,” Jackson wrote. “Disappointed in some family, friends, and officers for some reckless comments but hey what’s in your heart is in your heart. I still love you all because hate takes too much energy but I definitely won’t be looking at you the same. Thank you to everyone that has reached out to me or my wife it was needed and much appreciated. I swear to God I love this city but I wonder if this city loves me.”

Kedrick Pitts, Jackson’s brother, told NPR that Jackson “loved his job, he worked his job seven days a week.” He also said that other members of their family are officers and sheriffs.

Baton Rougue Police Spokesman L’Jean McKneely said in the above press conference that it was not clear how the shooting started on Sunday morning. The shooting took place near a B-Quick Convenience Store on Airline Highway, near Old Hammond Highway. Long was found dead near the store, reports The Advocate. Police used a robot to find out if there was an explosive device inside the store.

CNN reports, citing a source close to the investigation, that police were called to the area when there was a report of a “suspicious person” walking down Airline Highway. The shooting started when police arrived. Shooting was first reported around 8:40 a.m.

The above audio is the first 45 minutes after the call was made. It was posted to SoundCloud by Alertpage.

One witness told WBRZ that Long was wearing a black mask as he was seen shooting “indiscriminately” as he walked between the convenient store and the shopping center across the street.

Baton Rouge Police Department Sgt. Don Coppola also told CNN that Long wore a mask and all black clothing. He didn’t say what the mask looked like, but confirmed that it covered his face to his identity.

In his press conference, McKneely told citizens to report anything suspicious, especially if they see someone wearing all black or all camouflage. However, officials said at the 3 p.m. press conference that there is “no active shooter” in Baton Rouge.

4. Governor Edwards Called Incident an Attack on ‘All of Us’

Louisiana Governor John Bel Edwards quickly issued a statement after the news broke. He called the shooting an “unspeakable and unjustified attack on all of us at a time when we need unity and healing.” He added that all of the state’s resources are being used to find the suspects and “swiftly bring them to justice.”

#lagov on the shooting of law enforcement officers in Baton Rouge today: pic.twitter.com/BU3B4Iznbe

“I want to reassure everyone around the state we are doing everything humanly possible to make sure everyone is protected,” Edwards said during the afternoon press conference. 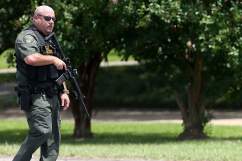 5. The Shooting Comes Just Days After Police Made Arrests to Stop a ‘Credible Threat’ to Officers & The Deaths of Five Officers in Dallas 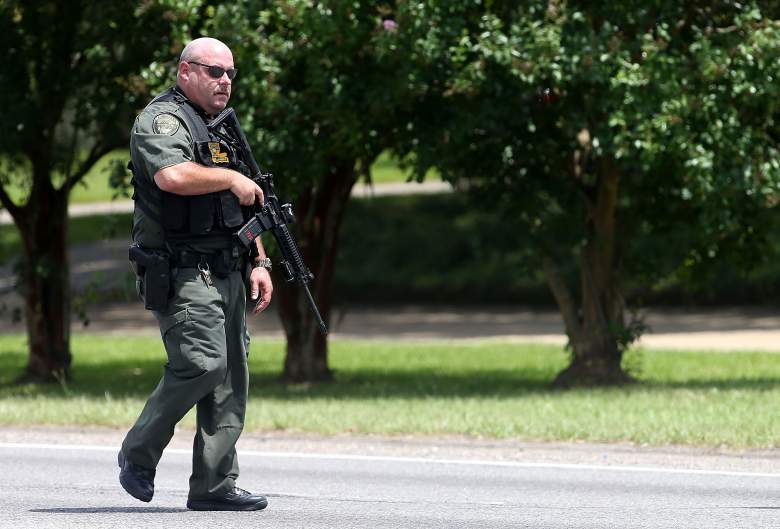 A police officer at the scene in Baton Rouge. (Getty)

On July 12, Baton Rouge Police Chief Carl Dabadie said that police stopped a “credible threat” to officers after arresting a man for burglarizing a pawn shop, The Advocate reports.

Antonio Thomas, 17, was arrested after a robbery of a pawn shop at 2 a.m. McKneely said Thomas told officers, “We’re going to look for bullets to kill police officers,” the Advocate reports.

The other suspects arrested were Malik Bridgewater, 20, and Trashone Coats, 23. A 13-year-old boy was also arrested, but his name was not released due to his age. The Advocate reports that they allegedly took eight handguns and a BB gun, although only six of the handguns were recovered by the time of the press conference on Tuesday. 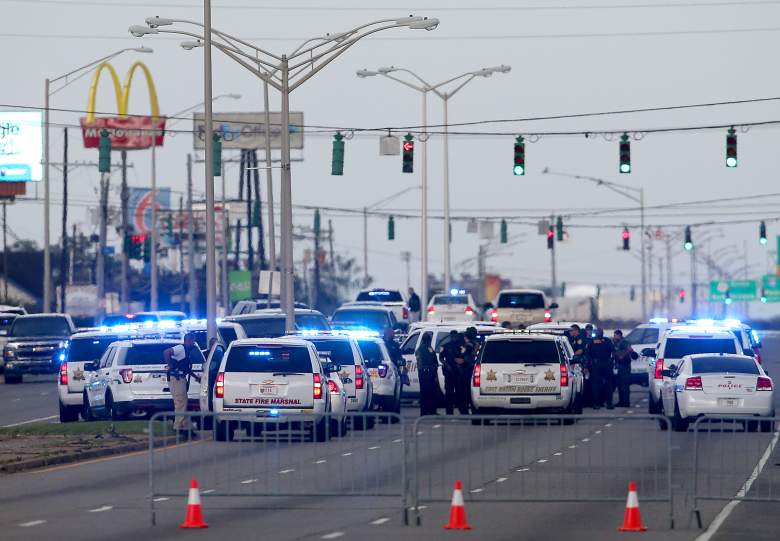 The scene where three Baton Rouge police officers were killed on Sunday. (Getty)

This is the second mass shooting of police officers in two weeks. On July 7, five police officers were killed in Dallas, near the end of a Black Lives Matter protest of police brutality, by a sniper identified as Micah Johnson.

“For the second time in two weeks, police officers who put their lives on the line for ours every day were doing their job when they were killed in a cowardly and reprehensible assault,” President Barack Obama said in a statement after the Baton Rouge shootings. “These are attacks on public servants, on the rule of law, and on civilized society, and they have to stop.” 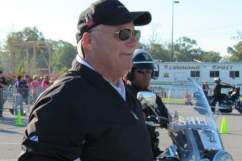 Loading more stories
wpDiscuz
19
0
Would love your thoughts, please comment.x
()
x
| Reply
Three officers, including Montrell Jackson, were killed in an ambush in Baton Rouge, Louisiana, where there is tension with police after the death of Alton Sterling.