Jill Stein attended two events in Minneapolis on August 16, where she answered questions and talked about the alternative that the Green Party offers for people who don't like the Democrat or Republican presidential choices. At 4 p.m., she met with voters at First Universalist Church for a press conference and speech. Then at 6:30 p.m., she was at Capri Theater for an NOC forum on Black America. She spoke out strongly against business as usual in politics, pushing for the legalization of marijuana, the end of for-profit prisons, the establishment of a real living wage, and the abolishment of student loan debt. She called for politicians and voters to put people, peace, and and the planet ahead of profits.

Stein is attracting more and more voters as people seek alternatives to Trump and Clinton, who have been shown in polls to be among the most unfavorable candidates in history. Stein will be featured in a CNN town hall on Wednesday night at 9 p.m. Eastern -- a primetime event that could help her gain the attention she needs to climb in the polls. If Stein reaches 15 percent in national polls, she could make it onto the general debate stage. But she'll need a lot more national attention for that to happen, and her appearance on CNN could help. Click through the gallery to see photos of Jill Stein in Minneapolis and read more about what happened at her two events. (Facebook/Minnesota for Jill Stein) 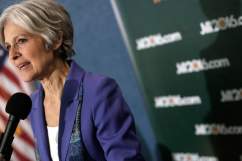 Jill Stein at the DNC in Philly: The Pictures You Need to See