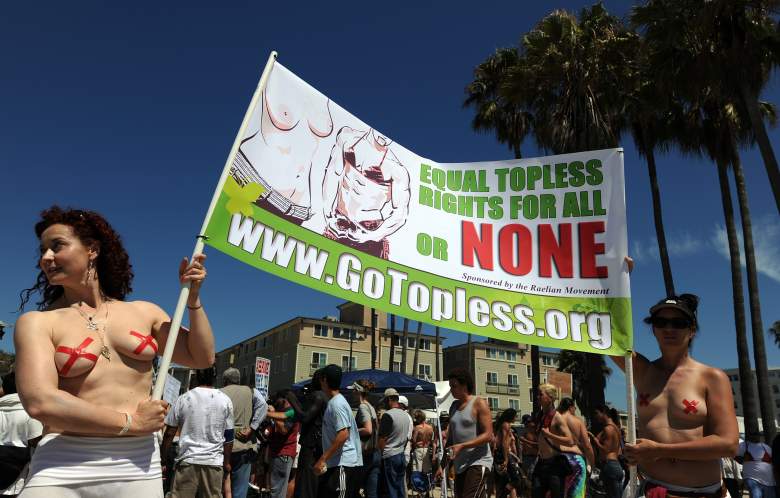 Go Topless Day, a movement started in 2007 and first observed a year later, is now international. This year’s Go Topless Day on August 28 includes events in at least 57 cities all around the world. Go Topless Day events are scheduled for cities in the U.S., Canada, the U.K., South Korea, France, Italy, The Philippines and more. Women and men will gather to support a woman’s right to go topless just like men.

The event is always scheduled for the Sunday closest to August 26, which is officially Women’s Equality Day in the U.S. That day marks the anniversary of the 19th Amendment to the Constitution, which granted women the right to vote.

Here’s what you need to know about Go Topless Day. (Note: Some of the photos may by NSFW.)

1. Go Topless Day Was Inspired by the Raelians Leader, Who Believes Humans Were Created by Aliens 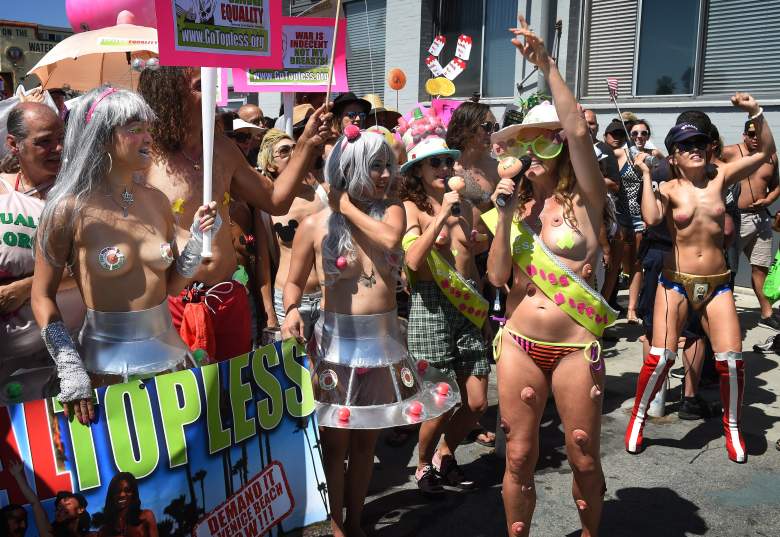 When you visit GoTopless.org, you’ll see a quote credited to Rael. “As long as men are allowed to be topless in public, women should have the same constitutional right. Or else, men should have to wear something to hide their chests,” the quote reads.

Rael is the founder of the Raelian Movement, which believes that aliens came to earth and created humans. The group, which does believe in the resurrection of Jesus Christ, wants to see world peace and think that sexual self-determination will bring that about. Rael, whose message is outlined in the book Intelligent Design: Message from the Designers, also founded GoTopless.org.

While the group hopes to build a landing pad for the return of the aliens, they have found the time to advocate for other causes. They have fought against female genital mutilation. In 2014, they help built a hospital in Burkina Faso where women could get a controversial clitoral restoration surgery.

A Go Topless Day event is scheduled in Burkina Faso. 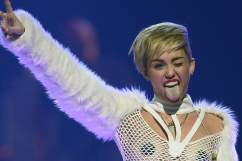 2. Going Topless Is Only Completely Illegal in 3 States, but Legal in 33 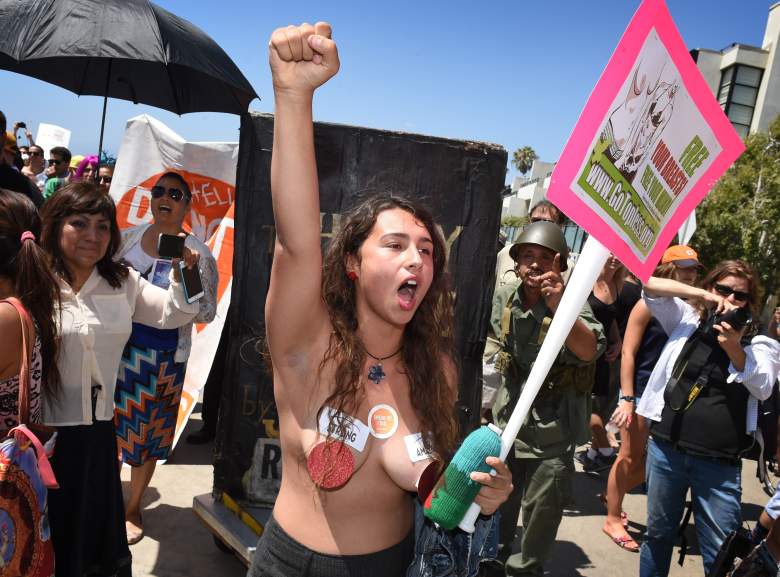 For an example of an ambiguous law on the matter, take Massachusetts. As Boston Magazine noted in 2013, when women wanted to organize a Go Topless Day event in Boston, the definition of nudity in the state could make it difficult to organize one.

“Nudity”, uncovered or less than opaquely covered human genitals, pubic areas, the human female breast below a point immediately above the top of the areola, or the covered male genitals in a discernibly turgid state. For purposes of this definition, a female breast is considered uncovered if the nipple or areola only are covered.

Massachusetts law also states that “persons guilty of indecent exposure” could be sentenced to “imprisonment in a jail or house of correction for not more than 6 months, or by a fine of not more than $200, or by both such fine and imprisonment.”

Despite ambiguous laws in Minnesota, there is one planned in Minneapolis. Faith Neumann, who will take part in the Minneapolis event, told MinnPost of Minnesota’s indecent exposure law:

It’s very interesting, because it doesn’t explicitly say men or women’s nipples. I called the district attorney’s office to find out, exactly, and she was appalled that I would even ask. I think it’s up for interpretation, but I know that a police officer would arrest a woman and not a man because of social conditions.

3. Going Topless Has Been Legal in New York Since a Landmark Ruling in 1992 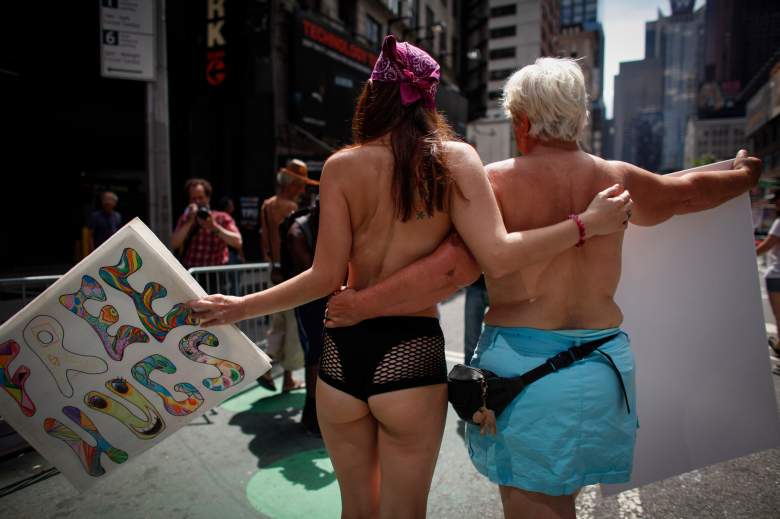 Thanks to the landmark New York Court of Appeals 1992 ruling People v. Stanorelli ruled that women could go topless, but only if it wasn’t for commercial purposes, The New York Times noted in August 2015. The issue came up again last year when desnudas – women going topless with only body paint and posing for money in tourists’ photos at Times Square – began appearing and Mayor Bill de Blasio tried to limit their work.

The long road to People v. Stanorelli dates back to 1986. Ramona Santorelli, Mary Lou Schloss and a group of feminists went topless to protest a law that banned going topless. In a 2013 interview with the Village Voice, Stanorelli explained why she doesn’t like the word “topless.”

It fuels the patriarchal values of how women are viewed. It has the connotation to topless bars and pornography, which from day one was what we were trying to get away from.

You can find the New York parade map right here. 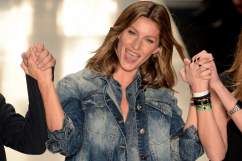 Gisele Bundchen Topless: The Instagram Pictures You Need to See

The video below is NSFW.

This year, Go Topless Day organizers have their own theme song. Released on August 24, “Go Topless Go” was written by Pico Masai and sung by Gabriela Dolanska. Of course, the music video features plenty of topless women.

“In the United States and the rest of the planet, we’re triggering a cultural revolution that will change the world,” Go Topless Day president Nadine Gary said in a statement on August 22. “The GoTopless revolution specifically targets the sexist, monotheistic, male-dominated culture that still plagues our society.”

Dolanska is a member of the Raelians and, even though her Facebook page lists her as coming from Slovakia, she told the Huffington Post that she’s from “infinity.”

“I was born with a body that was pure as honey/ I love my breasts as I love all the rest,” Dolanska sings. In another part of the song, she adds, “I shouldn’t have to hide/ It’s up to me to decide. If you don’t like my way/ You can just look away.”

5. Bikinis That Look Like Breasts are Available If You Don’t Want to Go Topless 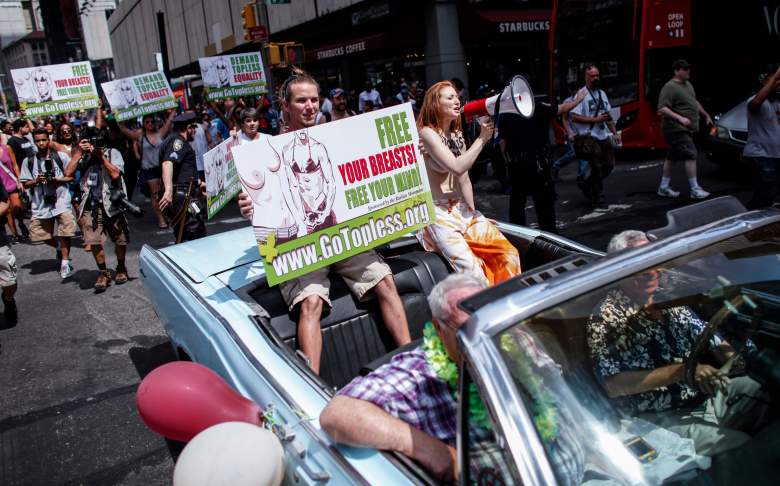 If you would rather not go topless at protests like these, but still want to show your support, the TaTa Top is available. These bikini tops look just like uncovered breasts. Each top costs $28.

The company behind the TaTa Top supports the Keep A Breast Foundation, which hopes to educate young people about breast health. They also support the 4th Trimester Bodies Project, which is a project photographer Ashlee Wells Jackson created to encourage women to embrace motherhood, breastfeeding and the changes the body goes through during pregnancy. 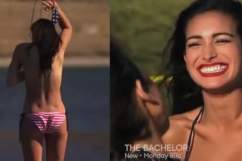 Loading more stories
wpDiscuz
2
0
Would love your thoughts, please comment.x
()
x
| Reply
August 28 is Go Topless Day, a day meant to support a woman's right to go bare-chested, just like men. Events are being held in 57 cities around the world.