Frederick Harris III, 49, was found guilty after a five-day trial of the grisly murders of his mother and stepfather in Pennsylvania, a crime shocking for its especially gruesome nature.

1. He Dismembered his Parents, Then Threw Them Out in the Garbage

In the days leading up to Christmas of 2014, after receiving a request for a “welfare check” from the couple’s daughter, police found the dismembered body parts of an elderly couple at their home in Penn Hills, a western Pennsylvania town of about 40,000 located 13 miles east of Pittsburgh. But there were still some parts missing.

Inside the home, the cops found Harris, the stepson of 76-year-old victim Lamar Gilbert and son of Gilbert’s wife, Olivia, who was 73 years old. The man had locked his mother’s bedroom door, lay down on her bed and pulled the covers up over himself. That’s how police found him, and when they attempted to remove him, Harris remained unresponsive, forcing police to physically haul him out of the house and take him to a hospital.

Blood was splattered throughout the house, and investigators found body parts inside garbage bags that had been tied shut and stuffed into trash containers in the couple’s garage. The heads of both Harris’s mother and stepfather were found in the same trash container.

The other containers contained hands, legs, feet and Lamar Gilbert’s torso. But police determined that Harris had already thrown out other body parts that had been picked up by local trash collectors. They searched nearby landfills, but were not able to find the missing body parts.

2. He Was a National Guard Veteran With a Criminal History

Alleged mansion-squatter Frederick Harris deemed incompetent to stand trial at court this morning. Being held at ACJ on a detainer while he

Harris while in college at the University of Pittsburgh, where he graduated in 1991 with a psychology degree, joined the National Guard and Army Reserve, leaving in 1996 having achieved the rank of first lieutenant. But what appeared to be a promising start to his adult life quickly went downhill, due apparently to mental illness. At one point he was diagnosed with bipolar disorder.

In 2011, Harris was arrested after police — acting on a report of a home burglary — found him in a bathroom closet inside an upscale home in Murrysville, Pennsylvania, according to a report in The Pittsburgh Post-Gazette. The home was vacant and had been placed up for sale by its owner, so Harris broke in and settled down.

Police said that he had been living there for several days by the time they found him inside the house. They also found a sleeping bag, and beverages in the refrigerator, as well as some other personal belongings. In addition, they learned that Harris was being sought for am insurance fraud charge, involving a false report that Harris filed about a motorcycle accident.

He later faced charges of assaulting and punching his sister, and had been expelled from living in his biological father’s home after he attempted to strangle the man.

3. He Spent Almost Two Days Dismembering His Mom and Stepfather

Police say that Harris stabbed his mother repeatedly, killing her, during the afternoon of December 13, 2014, while her husband was out shopping for groceries. When police finally entered the home a few days later, they found those same groceries on a kitchen counter. Olivia Gilbert struggled with her out-of-control son, suffering a defensive stab wound that penetrated clean through her hand.

After killing his mother, Harris patiently waited for his stepfather to get back from his errands — and then Harris stabbed him to death as well. Police believe that Harris killed Gilbert with a knife to the torso, but Gilbert’s torso was never found.

Using evidence from surveillance cameras, police were able to figure out that after slaying the elderly couple, Harris methodically attempted to scrub down the home to remove evidence, even making his own shopping trip to purchase garbage bags and new garbage cans, as well as a new pair of sneakers. He was also caught on video taking money out of his mother’s bank account.

Investigators said it took Harris about a day and a half to chop up the bodies, cutting the limbs at the joints, and dispose of them — putting them out with the garbage.

4. During his Trial, He Tried to Blame His Sister For the Crime

Angela Harris, 53, also suffers from mental illness which she controls with medication. On two occasions when she went off the medication, however, she strangled her own pet cats, saying she believed that they had “demons.” Otherwise, there was no evidence that she committed the horrific murders of Lamar and Olivia Gilbert.

But in the five-day trial that concluded on Tuesday, Harris’s attorney named his sister as a possible suspect in the case.

“All this finger-pointing at Angela Harris is ridiculous,” said Prosecutor Lisa Pellegrini in her closing argument Monday, according to a report on the TribLive news site. “She’s a broken woman. Is there any video of Angela buying any of these things? No, it’s the defendant.”

The jury didn’t buy the defense argument either, taking just two hours on Tuesday, September 27, to find Harris guilty of first-degree murder, as well as abuse of a corpse for the ghastly mutilations that he carried out on the slain bodies of his mother and stepfather.

Harris will have to wait until January 3 to learn his fate. That’s when he is scheduled for a sentencing hearing before a Pennsylvania Court of Common Pleas judge. But the first degree murder charges carry a mandatory sentence of life in prison in the state.

But according to Pellegrini, the fact that Harris is facing punishment for the killings at all is partly a matter of luck, foiled only by sanitation trucks that didn’t show up in time.

“He was one garbage pickup away from getting away with this murder,” she said. 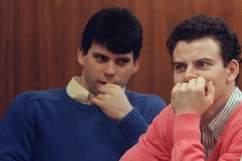 Lyle & Erik Menendez, ‘Murder Made Me Famous’: 5 Fast Facts You Need to Know

Loading more stories
wpDiscuz
2
0
Would love your thoughts, please comment.x
()
x
| Reply
Frederick Harris III was convicted of the grisly murder and dismemberment of his elderly parents in Pennsylvania.