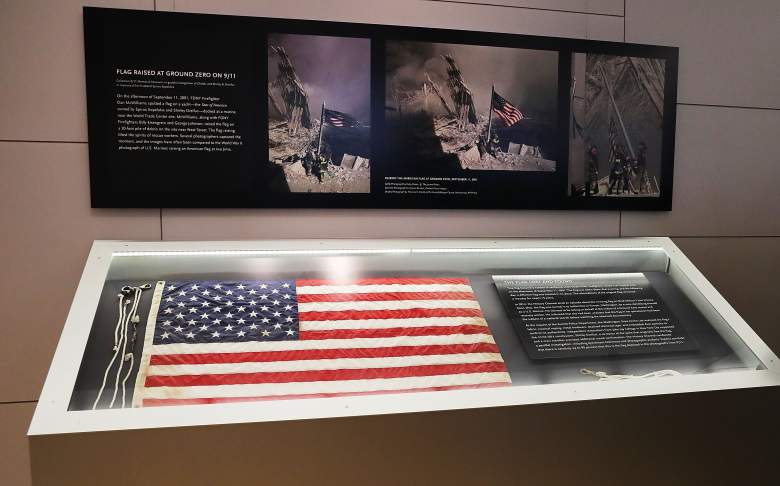 The flag raised by firefighters in one of the most iconic images from 9/11 is the subject of a History Channel special. (Getty)

Sunday, September 11 marks the 15th anniversary of the terrorist attacks on September 11, 2001 at the World Trade Center in New York City and the Pentagon. Several channels will be airing specials to explore the stories of that day and look at how the world has changed in the years since. Read on below for a look at some of the specials that will debut that day.

The History Channel will be airing two documentaries, back-to-back, starting at 8 p.m. ET. First is a new edition of 102 Minutes That Changed America, created specifically for the 15th anniversary. The original 2008 edition won three Emmys, including Outstanding Nonfiction Special. Directors Nicole Rittenmeyer and Seth Skundrick take audiences through a minute-by-minute look at the attacks with commentary from survivors, witnesses and first responders. The 15th anniversary edition adds new interviews and discussions on the events after the attack.

Brad Meltzer returns to look at the mystery behind the flag seen in the iconic photograph of three firefighters at Ground Zero in America’s 9/11 Flag: Rise From the Ashes. The flag was recently discovered in Washington State and the special looks into the mystery. The special expands on the 2014 episode of Meltzer’s History Channel show Lost History.

National Geographic will be airing specials throughout the day, beginning at 12 p.m. ET with Giuliani’s 9/11. At 9 p.m., the network will debut the new, two-hour special 9/11: The Longest War, which follows George W. Bush: The 9/11 Interview.

9/11: The Longest War is billed as a “comprehensive look at the past 15 years” since the attacks. It includes interviews with those who worked in the World Trade Center and military leaders. It also includes video from the Pentagon, taken just after American Airlines Flight 77 crashed.

PBS will re-air 9/11 Inside the Pentagon on Sunday at 7 p.m. ET. This documentary, which focuses on the attack on the Pentagon, debuted on Tuesday, September 6.

CNN will premiere its own 15th anniversary special, CNN Films Presents: 9/11: 15 Years Later. The two-hour film begins at 8 p.m. ET. Following that, the hour-long We Got Him: Obama, Bin Laden, & the War On Terror will air.