Dan Senor, 44, is a top Republican operative who is currently an adviser to House Speaker Paul Ryan. But this week, Senor found himself at the center of a conspiracy theory circulated on right-wing web sites that he was the leaker who somehow obtained and sent the Access Hollywood video of Donald Trump bragging about sexually groping women without their consent.

There appears to be nothing to connect Senor to the leak of the video, but the conspiracy theory has taken hold online, including among extremist sites that have alarmingly given the theory an anti-Semitic turn. The conspiracy theory even received an airing on Fox Business Network Thursday.

1. Senor Encouraged Reporters to Ask Trump Surrogates About the Video

Dan Senor leaker of Trump audio. Romney/Ryan adviser. Ryan then leaked it to the Washington Post! Your about to be famous Danny. pic.twitter.com/qgynWRxwEz

In a pair of tweets Monday that have since been deleted, Senor — who has been outspoken in his opposition to the Trump candidacy — reportedly encouraged the media not to let up with their questions about the Trump Access Hollywood tape, on which Trump is heard bragging that he can get away with sexually molesting women because he is “a star,” after the Sunday night presidential debate.

“Note to media: if interviewing Trump surrogates today, focus q’s on tape. Besides Rudy, these surrogates were all hiding over the weekend. Now Trump surrogates magically appear b/c debate wasn’t a disaster. You shld intv them abt the tape, as though the debate never occurred,” Senor said in the Tweets.

Senor himself has mocked the conspiracy theory in a tweet on Tuesday.

Conflicting reports about Trump tape. The leak was either a Jewish-globalist-media plot led by me or…something not insane. It's the latter

2. The Theory Appears To Have Started With Mike Cernovich

Blogger and Donald Trump supporter Mike Cernovich appears to have initiated the conspiracy theory with a tweet on Monday.

.@dansenor Writing about #BillyBush tapes, hearing your wife (ex NBC) got a hold of tapes and you pushed the story for your boss. Comment?

But who is Cernovich? In addition to being a prominent Trump backer, the blogger is perhaps best known for his contention that there is no such thing as date rape.

Have you guys ever tried "raping" a girl without using force? Try it. It's basically impossible. Date rape does not exist.

After Cernovich made an appearance on a Fox News program in August, other conservative writers and activists expressed outrage.

“You’ve got to be kidding me. He’s a nutcase,” right-wing writer and radio host Ben Shapiro told the Daily Beast. “Granting any legitimacy to a fringe kook like Mike Cernovich, and all of the attendant nastiness and problems, is close to insane by any cable network.”

3. The Conspiracy Theory is Popular Among Anti-Semites

“In this conspiracy theory, Senor is now cast as the Jewish ‘traitor’ working for the conspiracy of political elites, international financiers and the media who Trumped railed against today in his speech,” wrote Talking Points Memo editor Josh Marshall on Thursday.

Indeed, former Ku Klux Klan leader David Duke tweeted about the conspiracy theory, placing three brackets around Senor’s name — a way of singling out Jewish people on line that has become popular among the so-called “alt-right.”

Looks like top Paul Ryan advisor (((Dan Senor))) probably leaked the #TrumpTape–America, are you at least beginning to see a pattern?#MAGA pic.twitter.com/g3tUYG0qrZ

“If we lose this election, it is going to be because of this pussy-grabbing tape. And having it be known that it was a Jew is extremely important. One of the GOP’s Jews being responsible makes it all the better,” write Daily Stormer editor Andrew Anglin. “The 35 percent or so of the country that is hardcore pro-Trump is going to know that it wasn’t ‘liberals’ that defeated Trump, but traitors within the party who abandoned him. And they are going to want to know why that happened. And there is only one answer: The Jews did it.”

4. Senor’s Wife Joked About the Theory — But the Conspiracy Theorists Didn’t Get It

Senor is married to former CNN anchor Campbell Brown, 48, who shares Senor’s opposition to Trump. She responded to the conspiracy theory with a sarcastic tweet of her own.

Yep. Still having fun after all these years. Key to a happy marriage. https://t.co/y5TJWmZ3sL

But Cernovich failed to get the joke, and took Brown’s tweet as “confirmation.”

Brown quickly replied with a clarification.

Apparently some w/ a dearth of brain cells thought I was serious. Didn't leak it. Wish I had. To be clear, REALLY wish I had. But didn't. https://t.co/tWQQn4rivu

Though Brown’s clarification that she was, in fact, joking about the absurdity of the conspiracy theory has not put a stop to it.

5. The Conspiracy Theory Was Treated Seriously By Fox Business News

Jerry Falwell Jr., 54, a prominent Trump supporter and president of Liberty University in Virginia — an evangelical Christian school founded by his father, the late televangelist and Moral Majority founder Jerry Falwell — appeared on Fox Business News this week to endorse the conspiracy theory.

Falwell claimed that he heard “six or eight weeks ago,” that top Republican operatives were hatching a plot to torpedo the Trump campaign.

“They said, ‘Jerry, these guys are working on something they say will guarantee that Donald Trump is not the nominee on November 8 of the Republican Party,'” Falwell Jr. told the network. “If there was a conspiracy, I know from my days of practicing law, if any two people ever — or more ever — work together to harm a third person, that is criminal.” 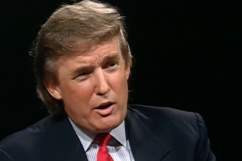 Dan Senor, an adviser to Paul Ryan, is at the center of a conspiracy theory alleging that he leaked the Donald Trump "Access Hollywood" video.