The Republican Party of Wisconsin took this photo and shared it on Facebook to show the crowd of people who attended a Trump rally in Wisconsin. (Getty)

Hidden within Donald Trump’s historic redrawing of the rust-belt electoral map is this reality: A relatively small number of people handed the election to President-Elect Trump.

In the end, a trio of formerly blue states were most critical to Trump: Wisconsin, Michigan, and Pennsylvania. The combined margin for Trump in those three states, which gave him the electoral college?

Only about 112,158 votes. (As of November 11, the race in Michigan was so close the Associated Press still hasn’t called the race. The same is true in New Hampshire, where Clinton has a slim lead.)

Turnout was down dramatically in one of those three states, Wisconsin, which controversially implemented voter ID for the first time, but more people voted overall in Michigan and Pennsylvania when compared to 2012. In all three states, third-party candidate voting was up (although it can be perilous to guess which candidate, say, Jill Stein voters would have picked if she wasn’t in the race. Maybe they would have stayed home or picked another third-party candidate, not Clinton).

Forty-three percent of Americans registered to vote did not vote in the presidential election overall.

The small margin makes other factors more salient, including higher voting tallies for the third party candidates like Jill Stein and Gary Johnson and the first-time implementation of the new voter ID law in Wisconsin. It’s possible Stein and Johnson together may have cost Clinton Florida, Wisconsin, and Michigan. In a macro sense, Trump won the slim margins in the three rust-belt pick ups because he seized western areas of each state that Obama won and are populated by rural, non-college-educated whites with economic angst, who liked his messages on trade, guns, law-and-order, and jobs.

Hillary Clinton failed to turn out the Obama coalition in urban areas. As an example, using Wisconsin again: Turnout was down compared to 2012, and, in Democratic Milwaukee County, 60,000 fewer people voted even though Clinton matched Obama’s percentage of the whole, said WUWM.

Clinton neglected Wisconsin, not campaigning in the state a single time during the general election (even though it’s a purple state with a Republican governor, Legislature, and Attorney General.) She did campaign aggressively in Michigan and Pennsylvania, where polling averages had shown the race was closer. It appears the pollsters didn’t do a good job of predicting the drop in Wisconsin turnout.

The problem for Clinton: The slim margins add up. Even if she somehow found a victory in one of the three states in a recount – say, Michigan – she would still lose the electoral college. If you remove Wisconsin alone from Trump’s column, Trump still wins too. Even if she won two of the three, he wins. Obviously, Trump also needed other important states to win, like Florida, Ohio, Iowa, and North Carolina. But those pick ups were not as surprising; the race had been deadlocked in the polls in those states. The flipping of the three rust-belt states that hadn’t gone Republican since the 1980s was the big election surprise – and the decisive one.

The Margin of Victory in the Three States

Supporters of Republican presidential nominee Donald Trump and his running mate Indiana Governor Mike Pence wait for the start of a campaign rally on November 7, 2016 in Grand Rapids, Michigan. (Getty)

How close was the margin of victory for Trump in each of those three states?

The Michigan race was so close that some news organizations don’t have it definitively added to Trump’s column yet (the same is true of a blue state that Clinton is believed to have won by 2,611 votes, though: New Hampshire). Trump won Michigan by 13,107 votes. In Michigan, a recount is automatically triggered if the margin is under 2,000 votes, but a candidate can still request a recount on the basis of purported fraud or mistake if the margin is higher, The Detroit News said.

Third party voting was up from 1% of the total to 7%, but overall turnout and voting was down from 2012. In contrast, Barack Obama defeated Mitt Romney by 205,204 votes.

David Dulio, of Oakland University, told The Detroit News that Democrats simply didn’t turn out enough people for Clinton in Michigan statewide (not just in the big urban centers), and lacked the Trump voters’ enthusiasm.

“Not enough Democrats showed up. It’s that simple,” he told the newspaper. “The turnout differences from 2012 – the last presidential election – to 2016 are stark. … Less so in Oakland County, but Democrats underperformed in terms of turnout across the state.”

The 2016 general election was the first presidential election where Wisconsin voters had to present a Voter ID. The Voter ID controversy has been fraught with tensions for years, as Republicans argued IDs were needed to protect election integrity, and Democrats argued Voter ID was a tactic to suppress the vote of minorities and traditional Democratic constituencies. In September, a federal judge expressed concern about allegations that “DMV personnel in the state have provided incorrect information to people who have applied for voter IDs.” The Nation had reported on those allegations.

There were other factors at work; Trump redrew the Wisconsin map. He flipped a region, the Mississippi River Valley along the western ridge of the state. That area went for Obama, but it’s full of blue-collar white working class voters. This was critical because Trump underperformed Mitt Romney in the state’s populous “WOW” counties – the three affluent Republican counties that ring Milwaukee. The other thing the three blue states have in common is their largely white populations. (Of the three, Michigan is the most diverse, and Wisconsin the least).

In addition, millions of dollars flooded into the state in the final week to boost the candidacy of U.S. Senator Ron Johnson, whose seat was considered critical to Republican control of the U.S. Senate. Trump also had the boosting of a Republican governor, Scott Walker, despite Wisconsin’s presidential blue voting history.

Here’s how the numbers broke down:

The results are from The New York Times. The Wisconsin State Elections Board only posts county-by-county tallies.

Let’s look at some key county tallies from the state Elections Commission:

79.78 2016 Voter turnout (officials had predicted turnout of 85% in Milwaukee County, but it didn’t materialize.)

In contrast, Milwaukee County turnout was about 87% in 2012.

Ted Wright holds a foam campaign prop from 1980 of former US President Ronald Reagan prior to the final campaign event of Donald Trump and running mate Mike Pence at Devos Place on November 7, 2016 in Grand Rapids, Michigan. (Getty)

Trump won Michigan by only 13,107 votes, according to the Secretary of State website (The Detroit News says he won by 13,225.)

The Detroit News attributed Trump’s Michigan victory to voters in western Michigan who supported his positions on trade, including white women, but especially white voters overall without college educations. The newspaper said Trump won by 11.5% in Macomb County, whereas Clinton won Oakland County by 8 percent, where she needed to drive up margins with African-American voters in particular.

U.S. Taxpayer Party nominee Darrell Castle earned more votes than the margin of victory in Michigan. However, if you look at that party’s platform, it sounds very conservative and not like likely Clinton voters.

Stein is a different story, of course. She had thousands of votes more than the margin of victory. She also increased her standing in Michigan compared to the previous presidential election, when she was also on the ballot. Libertarian Gary Johnson also dramatically increased his standing compared to 2012, when he was on the Michigan ballot as a write-in.

Bottom line: If enough Stein or Johnson voters had switched for Clinton, Clinton could have won Michigan (but that wouldn’t have been enough to secure the presidency). However, some experts point out you can’t assume how a third party’s candidates voted.

According to the Michigan Secretary of State’s Office, these were the vote totals for the 2016 general election. Notice that third party candidate voting greatly exceeded the final vote margin.

These were the winning vote totals in 2012, according to the Michigan Secretary of State. Obama won by 449,313 votes. 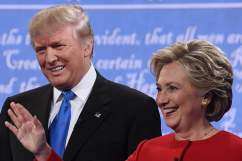 Supporters cheer during a rally for Republican candidate President Donald J Trump at Ambridge Area Senior High School on October 10, 2016 in Ambridge, Pennsylvania. This was Trump’s first appearance after the second debate. (Getty)

Unlike Wisconsin where voters also re-elected a Republican Senator and gave Republicans a larger margin in the state Assembly, in Pennsylvania, voters chose Trump while electing three statewide Democrats, said PennLive. Rural counties throughout the state voted for Trump over Clinton, though, and the small margins added up, said the newspaper. Westmoreland County in western Pennsylvania “gave Trump more votes than any other area,” said CBS Local Pittsburgh.

Here are the 2016 election returns in Pennsylvania, per that state’s Secretary of State office: